This one's pretty slow, I think I overdid it with the gradients and occlusion.

The scene uses Japan_blossom_FINAL.hdr as a background which I got here (he has some nice HDR probes!):
http://www.unparent.com/photos_probes.html

Copper looks good, but the oxidation suffers from the all too common oversaturation syndrome.

I'd make it a bit darker - not too much - and desaturate it. Probably 10-20% for both. You also might want to try using the Minnaert shader for the oxidation as well. It should give it that really nice dry powdery look.

He Who Has Struggled With Copper Oxide In The Past As Well.
Last edited: Aug 13, 2006
X

Thank Simon, I definitely will have a look at this Nodal seems to be an ugly beast to learn but quite adictive...
Xavier

Please Mr Jerrard, can we have an example of what you mean?

colkai said:
Please Mr Jerrard, can we have an example of what you mean?
Click to expand...

Copper Oxide has a rough powdery texture to it, like a very fine sandpaper. The Minnaert shader is designed to replicate this type of particulate or porouse surface, so it's my first choice for any surface that has these qualities - rock, sand, brushed metal, unfinished wood, etc.. If the surface has tiny holes or particles, Minnaert is likely the shader to use. Actually, make that Minnaert A. Minnaert B is better for more fibrous surfaces, where the fibers tent to stand up. It's a bit similar to Oren-Nayer - both of thse are good velvet shaders.

As for the coloring of the oxide, it's usually a bit on the dull side - not overly saturated in most cases. Now, it does have a habit of having all kinds of green shades, depending on the purity of the copper in it. Pure copper oxide would be a solid, deep green, but it's rarely found like this as a natural oxide on copper materials. In natural environments, the oxide is normally contaminated with other elements, giving color variations to it. Here's an example of a copper plate with oxidation that is on the blue side...

Notice the oxide has a dry powdery look to it. It's also not very saturated in color, being more of a blue-grey in most areas. Normally, it appears as a greenish grey color. There's a lot of photos of Copper Oxide occuring on copper pipes on this page, which show it in nearly a pure form, isolated from outdoor environments. This image in particular, is about as rich a green as it will get.

Compare that with the other image on that page, where it shows up as a lighter, less saturated shade due to it being exposed to other elements.

Now, here's some of my recent takes on it. I loaded up my teapot, and made it copper. 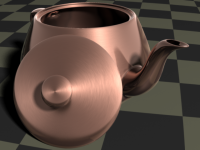 Once I had a copper surface, I disconnected those nodes and added some new ones to do the copper oxide look. It's a little more saturated looking in this image than it should be, but that's because I was going for something that would look right with radiosity added. Anyway, a Turbulent Noise node is giving the variations in color on this image. 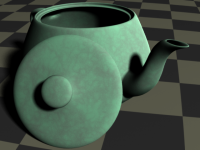 Now that I had my two main surfaces done, I needed to mix them together. I started out with the Occlusion node, which I used to focus the oxide into the crevaces with the help of a gradient. With that tweaked, I added a couple 3D textures and multiplied them with the results from the occlusion, so now the oxide wasn't so uniform looking.

It was also at this point that I realized a certain problem. Mixing the occlusin node (set to 2x6 samples) with a Ani-Reflections node, and a couple of anisotropic specular shaders with Monte Carlo radiosity results in a render speed measured on a glacial scale. And this was even after using Starbase's Bounces node to reduce recursive reflection blurring.

Anyway, that's my take on copper oxide. I went for a relatively clean look here, but you can see that the green isn't all that saturated. And the Minnaert shader does a good job making it look dry. I also used Minnaert on the brushed copper itself. It's good for metals too.

He Who Has A Few Other Renders Of This With Radiosity.
Last edited: Aug 15, 2006

Cool, thanks Dave, I often wondered what the 'real world' differences between shading models was. Would I be right in assuming therefore that certain shaders lend themselves better to certain materials.
I must admiot to normally not playing around with shading models, that said, documentation isn't much help when it goes technical instead of user-based.

colkai said:
Cool, thanks Dave, I often wondered what the 'real world' differences between shading models was. Would I be right in assuming therefore that certain shaders lend themselves better to certain materials.
I must admiot to normally not playing around with shading models, that said, documentation isn't much help when it goes technical instead of user-based.
Click to expand...

You would be right.

Rather than hijack this thread, I'm posting a more detailed response over here.

He Who Will Be Flying Next Week And Needs More Hijacking Risk Like He Needs A Lobotomy.
Last edited: Aug 16, 2006

Less saturated Minnaert, I quite like how it looks on the pipe. I tried putting in darkening amounts but it made the edges look unnaturally bright. More tinkering required I think.