I'm using the TC-1 with latest firmware release, and found that by using the Camera as a Key source on the M/E Row I can 'key' the LiveMatte camera image onto the Virtual Set.
This works fine and I'm able to setup the keyed camera image size to suit the Virtual Set image needed for the production. This allows the person on camera to have that 'hands on desk' view within the Virtual Set. Rather than having them chopped off at the desk surface?
The issue I have with the AR, is when I have the framing set as described above, I 'click' on the checkbox for the AR for the M/E Key, the camera image seems to digitally magnify and its image becomes very pixellated, as if its zoomed in on a proxy image. No matter how the camera image is setup with AR checked, the keyed camera image is unusable for using the "Comp" function to have setup moves within the Virtual Set.
As soon as the AR checkbox is unticked, the camera image is back at full resolution, but obviously, the "Comp" function is no more.
Sessions are PAL 1080 /50P.
Is there a step being missed OR am I missing something in the use of AR within the M/E, (is it only for graphics)?

Maybe a short video of what you are doing will help. If you size down a layer then use the COMPS feature to size it back up, it shouldn't pixelate. Unless the layer has been resized in a previous M/E or something like that.
M

kanep said:
Maybe a short video of what you are doing will help. If you size down a layer then use the COMPS feature to size it back up, it shouldn't pixelate. Unless the layer has been resized in a previous M/E or something like that.
Click to expand...

Clip shows firstly direct camera with LiveMatte, then Camera as Key on the M/E3 Row.
This keys fine, no issues.
Then when the AR checkbox is clicked, the image is suddenly 'zoomed' into magnifying the image and as the Zoom along with X and Y sizing is changed, the poor resolution is seen on the Chart with the text on the Chart to bring the size of the chart back to where framing is preferred.
Once the AR checkbox is unticked, the image goes small.
The problem being faced is when AR is clicked, the resolution of the camera takes a dive.
This is before using COMP. 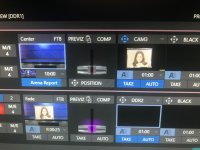 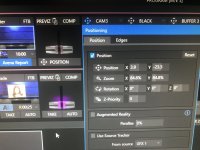 Any thoughts on this issue yet, as I'm wanting to resolve this soon?

Been at IBC, just got back.

Is the virtual camera positioned (zoomed) all the way out when you setting up the position and size for the AR element? It looks like you are already 'zoomed' into the set, then turn on AR which will at that point the system will calculate where the AR element should be in space. Do all of your positioning with the virtual camera as far 'back' as it will go. Then it will not shift around when you turn on AR.

Also, if you want an element to stick in place and not slide,make sure the parallax option is set to zero. As you raise this value, then you are telling the system you want it closer to the camera and it will move at a faster offset then the background.
M

Thanks for the info, will try out your suggestion to see if that's the part I've misunderstood.
M

I have tried your suggestion and commenced by having the Virtual Set -Wide, then used the Camera shot as a Key source with camera framed.
Clicked AR on and then 'zoomed' in on Virtual Set followed by zoom of Camera with the Positioning Window to set the composed shot required.
The video below shows the Camera direct with LiveMatte with a clock wipe revealing the Virtual Set. Overall it seems fine but there is a Hi-freq roll off in the Virtual Set from the Camera picture that is shown in the Charts Text appearance

I have tried to setup the AR component within the M/E row (watching your 2 min tutorials) and I can see how you do it with GFX etc. to 'attach' the element required to the Virtual Set, but when I use the Camera as source Key you have explained above in a simple way to set it up but then as soon as one attempts to 'Size' the camera Key, the image suffers and loses definition. Is this at all possible as I still haven't seen a clear way of doing this?
You must log in or register to reply here.
Share:
Facebook Twitter Reddit Pinterest Tumblr WhatsApp Email Share Link
Top Bottom