The New & the Olds

I picked this model up some time ago for like $6 (who wouldn't) and mostly just used in in the BG. I set basic surfaces so it looked presentable & put it into a scene. It was some time later when I noticed I wasn't getting any spec kick, etc. of the side windows. Excellent reason for that; there weren't any. Hmmm. Thinking they were there but "rolled down" I checked that and nope. No window geometry at all. Even on the original.

Drat. Started researching photos, and most I was finding had the windows rolled down. Double Drat. Not only that, There are several sub models, 2-door, 4-door, hard top, convertible, with & without the Pillar (the post between front & back). That was an era where ya had choice certainly.

Anyway, I finally found enough to get me started at least. Was bracing for making curved windows, but all the ref shots I could find showed them flat.

The challenge was making the chrome window trim as unlike the rest of the models geom, it was a mangled mess so no way to work with it at all. And it changes directions & contours too. So, I went through a laborious process of doing slices to get contour points, creating clean polys that I could then use Spline Bridge on. Used the technique show in the "Is Lightwave 3D the WRONG TOOL for the Job" vid on YouTube. Had a few restarts but got it pretty workable now.

Anyway, the proverbial Before & After: 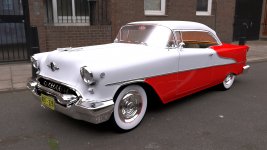 Oh, the fuzzy dice are mine. Can't have a classic car like this w/o them. Finally got a chance/reason to play with Fiber FX.
B

there is no sanctuary....

Thanks. A minor tweek:

It's a nice model, and the shading looks good... just a shame there seems to be a lot of 'blooming' on the top of the hood area.
Other than that, looks nice!