Anyone knows how to obtain te texture of the stars that appear in the new Pixar's short "La Luna"? it's like some kind of "inner" light, I've been trying to get that with nodes, but still far away from something...

c'mon, nobody has seen 'la luna"??? there's has to be a node comb or a shader that gives you that... inner glow, ceramic, translucent, something!!!
anyone??

Fernee said:
c'mon, nobody has seen 'la luna"??? there's has to be a node comb or a shader that gives you that... inner glow, ceramic, translucent, something!!!
anyone??
Click to expand...

I don't have time to test my theory, but what about an inner star geometry encapsulated in an outer shell of geometry? The inner star would be Luminous (maybe with a Fresnel/Incidence angle gradient so that the geometry angled towards the camera is more Luminous than the edges angled away from the camera), and the outer shell could be Dielectric.

You're over-thinking the solution. The basic is very simple - a distance to center gradient. You can do it with two keys, though, to fine tune the look, I went with four. I used Jovian to get the colors off a frame from the short, which I applied to the four keys, and fed the color output of the gradient directly into the Diffuse Shading. Add a Spot Info and an Item Info, and feed the Object Spot and Object Position into a Distance node, and use that as the gradient's input. A bit of key adjusting and I got the basic look I wanted, which is nearly the final result.

Next was to add the Fresnel effect. Easy again, since there's a node called Fresnel that does the trick. I went with an IOR of 1.5. Feed this into the Reflection input, and your reflections are taken care of. For the darkening you see in the Pixar stars, I took this same output and added it to the output of the Distance node. This was a very slight change, so I multiplied the Fresnel's output by 5 first. Now, instead of the colors just getting darker, which also has the effect of making them lose some saturation, I'm shifting them to the darker colors in the gradient instead, on those glancing angles.

If you look at the Pixar versions, they don't have a perfectly smooth transition from one color to the next. There's a slight bumpiness to them. So, I added a Turbulence bump to the entire thing, with about a 25% amplitude. This gives a slight rippling to the surface, which adds a bit of irregularity to the color transition too, due to it affecting the Fresnel.


Note: The Bump and Normal inputs on the Surface Node, affect EVERYTHING, including Fresnel nodes, Materials, shaders, or anything else that references the normals of the surface. If you want them to affect only specific nodes, then do not plug them into the Surface Node.​
There wasn't enough rippling to really affect the gradient when seen face on though, so I added a Crumple node, and added its Alpha to the Fresnel output as well, and scaled the Opacity to 35%. Now the gradient colors had a nice mottled effect like you see in the Pixar stars.

Finally, just for some variation, since I was using instances to fill the scene with a bunch of stars, I decided to vary each one a bit. First I rerouted the Gradient's color output into a Color Tool node, which then fed into the Diffuse Shading. I added an Instance Info, and took the Fixed Random output from that and fed it into the Color Tool's Hue input. The default output was too much, so I multiplied it by 0.2, and then I subtracted 0.1 from that, so my hue was shifting in both directions equally.

I also wanted to vary the brightnesses of the stars. Unfortunately, there's no way to get a different set of random values out of the Instance Info node - they all output the exact same values for each instance (an additional Seed value would be handy), so if I stuck with this, then the hue & brightness of the stars would all be linked; redder stars would always be darker than the greener ones, which would always be brighter.

To fix this, I used Mike Wolf's Random Scalar node. This generates a fixed random value based on a seed, so, unless you vary the seed value, it's going to give a constant value within the range you specify. So, to get a different value for each star, I took the ID Index from the Instance Info and fed that into the Seed input. However, this just gave me the same result that I got by just taking the Fixed Random output. So, to shake thing sup, I used a Power node and raised the ID Index by a power of 1.2 before putting it into the Seed input. Now there's no linear correlation between the two anymore. Finally, I added that random value, which I ranged from -0.5 to 0.5, to the Distance output, which further shifted the gradient up or down, this time, on a per star basis. 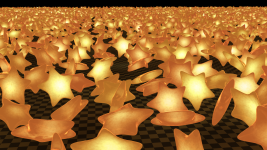 Took about 2 minutes to build the star, about 1 minute to set up the basic gradient, and about 20 minutes to finished up the rest of the tweaking. Render took another 7 minutes.

He Who Also Slightly Saturated The Original Colors To Allow For A Post Glow.

well, thanks a lot XswampyX and Dave... that was fast!! great skills...
J

I probably spelled "incompetent" wrong too.

::heads to attic with rope::

Very nice look Dave, (and also XswampyX) though I am not sure it quite feels as SSS as the pixar result. Much simpler and faster to render though! I wonder if you put some small balls with displacement and made them super white - and then give the stars huge SSS if that would be closer?

Tobian said:
Very nice look Dave, (and also XswampyX) though I am not sure it quite feels as SSS as the pixar result. Much simpler and faster to render though! I wonder if you put some small balls with displacement and made them super white - and then give the stars huge SSS if that would be closer?
Click to expand...

Well, I think Pixar spent a little more than 20 minutes on the look, and they also have that glow around them which will also change the look.


Not much point in going the SSS route when the surface is casting light. I saw the short & it didn't look like they were doing anything fancy. A few minutes of playing around and I came pretty close to what they have. I could tweak the colors a bit more, add in some blurred reflections, maybe some textured reflectivity as well, but if you look closely, their stars all look slightly different, so I could spend days trying to match one, and never have a match for any of the others.


He Who Is Satisfied With What He Came Up With.

Man of many cells.

Stolen and saved! Thank you!

Dave Jerrard said:
Well, I think Pixar spent a little more than 20 minutes on the look...
Click to expand...

This made me laugh. That's because they don't have you Dave.
J

how about assymetrical objects?

The "distance from center" gag works good for a symmetrical object like a star, but what if you wanted to get this look on something like, sayyyyyy, an extruded block font?

A "cooled at the corners, but still glowing hot" effect?

He Who Is About To Throw This 32 Core Machine Out The Window.

Man of many cells.

He Who Is About To Throw This 32 Core Machine Out The Window.
Click to expand...