"Heroes and Villains," a volunteer-developed Superhero MMO, is at the stage where character animation is needed.

Join former players of City of Heroes in the development of a passion project: a new Superhero MMO game that seeks to go beyond past and current games of the genre.

You can see the game web site HERE.

WHAT DO WE NEED?

As a long-time LW professional, I have wanted to use LW for a game project. So, I have volunteered to gather any interested riggers and animators into a team that can start creating animation for H&V.

Must be proficient at setting up skeletons, IK, and Controllers (with Expressions)
Things that will need to be rigged include: hair, capes, robes, coats, hair, tails, and wings.
The game is being programmed using the HERO Engine. So, we can animate in LW, bake the animation, and then export to FBX.

Need "Go-to" Animators for various types of characters, such as: the Vixen, the Brute, the Acrobat, the Four-Legged Creature, the Winged Creature, etc.


If you're interested in being part of the fun (and, yes, considerable effort), please contact Roger at [email protected]. 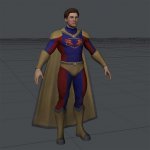 You could get through a lot of the rigging work with Genoma or RHiggit.

I've actually been watching Rhiggit 2 videos over the past two days.

I know how to do basic rigs, but I mainly animate. Looking at the Genoma 1 rigs makes my head spin.

With Rhiggit 2, I should be able to do what is needed for the project.