erikals said:
unless they are controlled in some way, people just don't do this.
they are just "sheep" running around, with no real aim, no guidance.
we can look at Russia. same thing. people with no real aim.

and as for "white" Scandinavians,
in the 80's people wanted change.
in 2022 people want fame or money.
exaggerating.

No I don´t believe most of those in gangs are controlled and forced in to gangs, in fact..studies and interviews, police, social workers have researched why they enter the gangs, and it´s mostly their own choice.

As for white scandinavians or not white, I really don´t care about skin color, eye color or hair color for anyone that comes here, what is evident is however that certain cultures and regions just have difficulties to adapt, and others not much of an issue, ucrainians for instance are considered by most swedes to be in a cultural proximity and is respected in another way than those coming from the middle east, that doesn´t state that I would think everyone from a certain region is the same, it isn´t that way, but still there is a tendency towards cultural differences being too strong, denying that and you are only supporting a delusion of "no rascism" and everyone is behaving well, as long as they are received the same way, that is not the truth, we are all different and in some cases a lot similar, but you do not want Drunk Swedes running loose at night in certain countries.

I recall myself working as an industrial worker in the 80´s, were I met a lot of Yoguslavian workers, they were hard working, same with some polish workers, their culture and religion (generally) was/is however quite similar to ours, so they adapted quite well.

It also helps if you are like 1.95 in length, and a bit egoistic and with a talent for martial art kicks on a leather piece, that is helpful when you try to fight your way from powerty in the special areas in Malmö/rosengard, if You can stop doing criminal activities, in Zlatans biography, he mentions that he was a talented thief, stealing bikes because his father couldn´t afford one, and you can take the boy out of the ghetto, but not the ghetto out of the boy.

Zlatans motivation and desires was to be something else than a criminal though, and it turned out quite well ..thank´s to his intelligence to recognize that such paths of stealing would not be a good path, but take his mental attitude and physics in to the sports could elevate him to another status for himself, and within others eyes.
Though I understand his motives for being a bit egoistic and not being like everybody else, to aid for him to become special, but I don´t like his attitude, I prefer the Peter Forsberg attitude, who became very special despite himself having a completely different attitude, the team first, I don´t care about me really, he used to turn his team skirt with his name not visible in the locker room before a game, because the focus was on the team, not himself, of course...Peter was growing up in a different environment they weren´t poor like Zlatan, so different lifes and challenges.

We should have a backup of our lifes, restore previous version of life, just switch the letters file around to life.
Last edited: Sep 21, 2022

just today one of those small ones looked at me an inch away, and screamed, just for the fun of it.
it's ok, i'm going deaf after all the screams anyway.

Forgot to answer this...

Yep..you are correct, I wouldn´t survive, if someone wan´t me to break down, putting me in a place with screaming kids are should do it.
I´m sure Ivé told you this before, but I think I have some over sensitivity for many sounds, not just screaming kids, whining, or stomping etc..but those sounds sure cut´s like a knife in to my head.

Now the big question, what was it in your appearance that made the kid scream? it´s either something wrong with you
Or the Kid in person, or Kids in General
I put my bet on the devil in the kids though, and I wouldn´t be surprised if you agree.
Just imagine if the elderly care would get the idea of mixing young kindergarten kids with meeting up elderly, I think I have seen such devilish experiments, hopefully by that time I may be deaf while still be able to have a stick to hit the devil with.

the "grown ups" are the toughest ones.
believe me.
mocking each-other.
talking behind each others backs.

i want out actually.
crazy crowd.

erikals said:
the "grown ups" are the toughest ones.
believe me.
mocking each-other.
talking behind each others backs.

i want out actually.
crazy crowd.
Click to expand...

Never heard anything like that about me, I only know what I say about others behind their back
If it´s a woman it may be nice words though.

No seriously, that is often the case in workplaces, there may be exceptions..but you never know until the shit hits the fan.

I have been at one place like that, with people constantly sitting in the coffe room, or just talking in groups, picking out a few persons to talk shit about, and yeah, so that is not the place you want to be in, one can easy understand that No one is immune from getting shit behind the back, not Oneself.

But ..I am at that age now that I don´t care, if they have any critic or dislikes, sure tell it to my face with a decent manner, or you would be dismissed, and I wouldn´t care a thing about that person, or what they say.

My last job we had maybe one person that was subject for it, but otherwise I liked that staff, only 8.-9persons in there, and two extra working norwegian guys
But those guys were ok, And to be honest, the guy who sort of was picked at, wasn´t a guy I liked that much either, but I tried my best to not inflate the discussion around him, it´s just his extreme religious point of views that was on the topic, where everyone else had none.

But...I think we may be talking too much off topic around these matters publicly, I don´t think it´s that appreciated, so maybe continue such debates privately, as long as they don´t accuse us of talking behind their backs we were just trying to keep it all public right
Last edited: Sep 21, 2022

..I am at that age now that I don´t care, if they have any critic or dislikes,
Click to expand...

I'm pretty good at it now,
but this place just "kills" me.
almost like gangs.
oh well.

yeah, sorry, back to topic.

The confusing windows 7 restore info when you try to make a system image backup in windows 10, so don´t worry that it says windows 7 on your windows 10 system.

This backup utility built in windows 10, will make a Full system backup, but you can not selectively choose files, apart from certain drives I think, but otherwise it includes the whole system, installed programs, folders etc.
So at least making one full system backup could be a good idea, and use other backups for project folders frequently used...

My system is in Swedish, "system avbildning" (check arrow) this option will make a full system image backup, it requires you to burn to a boot content device, which most often is a cd drive, but then you burn the actual data storage on to external drives, and it only uses the CD drive as a boot disc to find that data, once you need to restore it all.
The other option here is to create only the system disc of the operational system.

You may need to check advanced settings in windows security settings to reach to these options, the standard security Backup settings will not go to that level, only the file history options, you probably need to check the "more options" then again .."advanced settings" and even there, it is at the bottom left corner of that page where you can find full system backup Link...
It´s a bit weird they have managed to hide all that within so many levels, unless I have missed a simpler link to that backup, on the older windows 7 operative systems, it was much easier to reach that option. 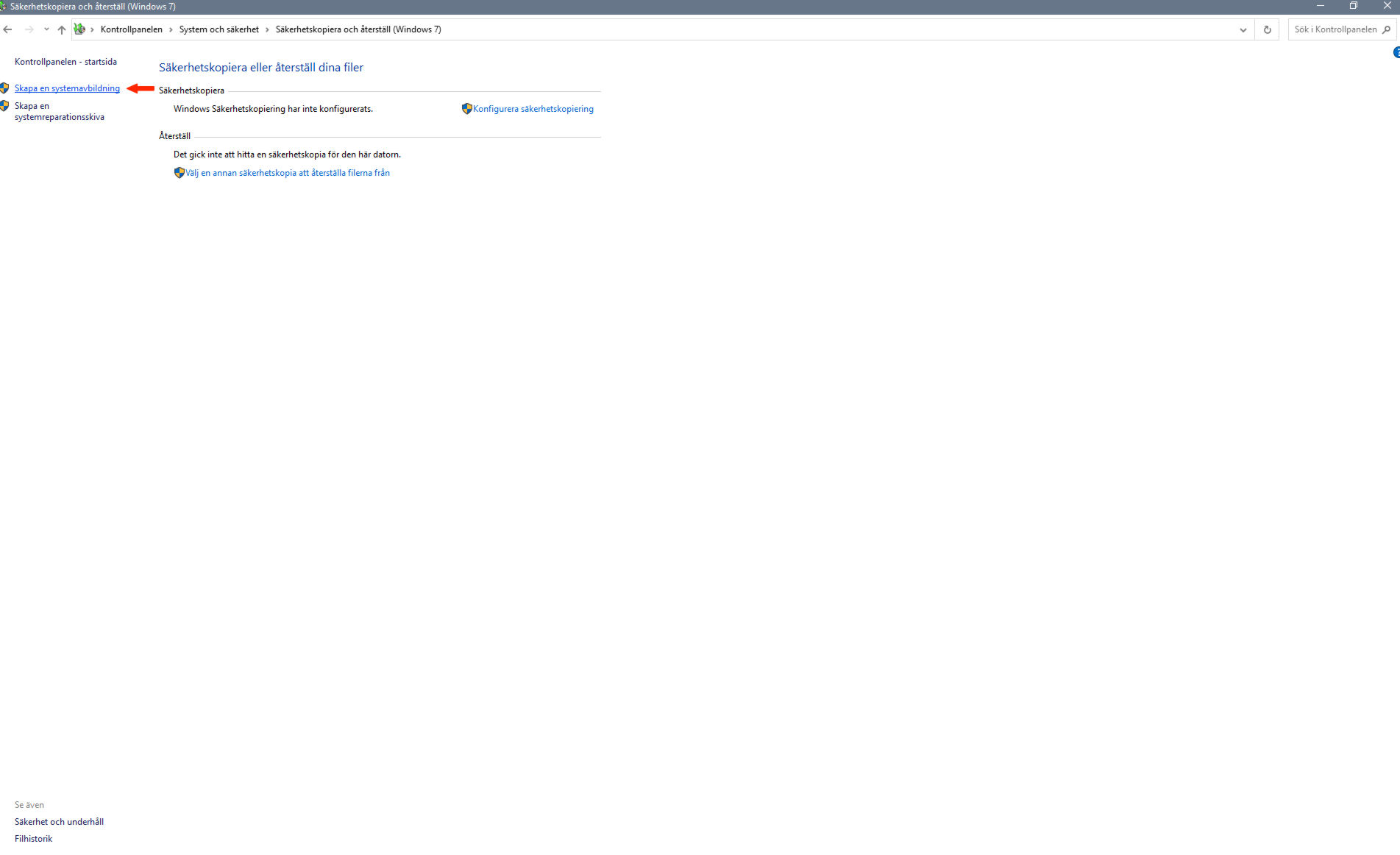