Randomness between polygons sharing a surface

Ok, I hope that title accurate describes what I want...

Basically, I have a building with windows, and I want to crack those windows. I have found a node which does the job, and gives the cracked appearance I want, except I would like a bit of randomness between the window panes. In doing so, I would also like to have all windows use the same surface (i.e. "Small Window"), as the building has over a hundred windows, giving each one its own surface (or even group windows to several surfaces) would be a bit of a pain in the rear.

I'm using the Cell from the IFW nodes collection. I've tried using various outputs of the Spot Info and other like nodes into the Vary and Seed inputs of Cell, no good.

If you look at the attached render, you can follow the crack lines from one window to another, which ruins the effect.

Anyone know how I could possibly accomplish this?

You can do this with dpont nodes kit. There is a node called partinfo under displacement section I think. Plug that into the position input of your cracked node and you should have a good starting point.
G

Thanks cagey5, but unfortunately the lines are still continuous across polygons whether I use oPos or wPos as the input.

Hmmm. Not at my computer so can't do a step by step, but I'm sure that's what I've used previously.

You are using the partinfo item id output into the procedural position input yes?

And this is the dpkit partinfo not spot or item info?

Attached is a quick image to demonstrate the effect on an array of rectangles. All one object/layer in modeller with a single surface. You can see the simple node set-up I used, using the veins procedural as an example.

Thank you cagey5. Sorry, I've been a little busy. I'll have to play around with it. I was not getting any randomness even with the Part Info node, maybe its the node I was using as the destination.
D

For surfacing, you should use the Index output of the Part Move node,
if your window glasses are made with one polygon only,
the Polygon Number output of Extended Spot Info node (DB&.W)
is faster for varying your procedural.

Is it possible to use an image map and have it placed randomly on a surface?
I have a 30x30 surface divided into 900 polys. I want an image map to be irregularly placed all over it. I'm trying to make random foot prints in the snow.
D

Dreamer said:
Is it possible to use an image map and have it placed randomly on a surface?
I have a 30x30 surface divided into 900 polys. I want an image map to be irregularly placed all over it. I'm trying to make random foot prints in the snow.
Click to expand...

I don't know what image bombing is. I want to take one paw print and have it randomly placed on a surface. Something like this example.

Image Bomber does something like that,
check RmanCollect on my site.

Thanks, I'll try it now.

LW just crashes when I use the Image Bomber node at default settings.
D

Dreamer said:
LW just crashes when I use the Image Bomber node at default settings.
Click to expand...

Doesn't crash here, both Texture and Node versions
as texture layer color or as node setup connected in nodal surfacing,
though I'm testing on win32,
could you post your setup?

I'm just using this image on a plane. All settings are default.

Could be something in the Mac version,
did you try another procedural of RmanCollect?

Most of the others work fine. Here's what iImage Bomber looks like before the crash. A quick screen capture. 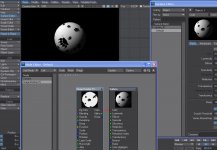