Problem with deforming added model parrts on model brought in as an FBX in LW2015.3

I'm having a problem adding modeled parts in Modeler and Layout to a model that was originally exported as an FBX from Daz 3D and imported into LW 2015.3.

The problem is that I can't get the modeled parts that I created [the harness around the creature seen in the pic below] to deform with the original DAZ model when I rotate the bones LW created from the file.

It didn't matter whether I had the harness as part of the creature model on the same layer, or even if it put was on a separate layer, and using the use "bones from option" and selecting the creature model itself or the .fbx stand-in null [which contains the bones]. No deformation is happening to my parts.

My model does not have a weight-map applied to it yet, BTW.

If it's weight-maps, then I'm not at all sure how to proceed to get it to work as it should.

I don't have OD Tools and not sure if that would help anyhow.

Also, is there a way to get the bones that were created in LW from the fbx file, to be put directly into the model itself?

Any help at all with this problem would be greatly appreciated.

My guess is that the rig uses weights for the bones. So unless you can add the same weight maps to your new parts the rig wont work as is with your added geometry. You could select all the bones and in the bones properties set the Bone Weight Map field to None. Your rig looks like it might not need weight maps.

But if that does not work well you may need to use weight maps. I use 3rd Powers Paint Weight tool (http://www.3rdpowers.com/index_store.html). It is great for doing all sorts of weight painting as well as transferring weights from one object to another. It is a bit expensive thought. Liberty 3D also has a tool for transferring weights which works well: https://www.liberty3d.com/store/tools/weighter-2-0-for-lightwave3d-modeler/

What you might check on is actually back in Daz. Parent-in-place the Harness to the Centaur if it's currently separate, then try your FBX export.

If that still doesn't do it, you might have to delve into the dark arts & use Daz's Transfer Utility to copy over the Wt. maps.

Are you saying turn off all wight maps on the centaur itself? My model desn't have them right now.

As to the other suggestion...

I think, if I'm understanding correctly, that you are saying to import my model to Daz. However, I'm not sure my model would be the same size as the centaur was if I bring it into Daz.

I'm short on funds for the 3rd Powers plugin, though I'm sure it's excellent. Might be able to swing the other from Liberty 3D though. This is a personal project so no money will be made here to pay for an expensive solution.

Ah. I see. I thought you had the harness in Daz already as well. But that might be a route to try actually.

Export the harness from Modeler as an OBJ. Import into Daz & use the Lightwave scaling preset when the Import OBJ requestor asks. If it's almost but not quite scaled, delete & re-import but use .97656 as the percentage. (It's a power of Twos thing).

Parent then position the harness.

I think when you export now as an FBX, it transfers the wt. maps as part of the process. If not, use the transfer utility first.

Bought and tried the Weighter 2 plugin and all it does is crash my LW Modeler [2015.3] no matter what I tried. A note after the fact from them [Kat] after I bought it was that its highly unstable after LW 11.6 [no refunds there? - wasted precious money]. Need to try some other route.

Does Modeler have a way to specify a previously saved/loaded weightmap? I only see create, delete, and rename.

Just received a notice today of a refund to me for the non-working Weighter 2 plugin. I'll have to explore the 3rd Powers option maybe in a few weeks if I can gather the cash. Thanks Liberty 3D.

I'd test what I was suggesting first as you might not need to buy anything.

I did a test but found that the added parts were not deforming as they should. They got distorted.

Maybe its because I had taken the object I had exported as an .obj in LW and brought that into Daz, and then resized it there. Not sure.

The main reason I wanted to get this to work is because the harness would need to follow the same distortions of the centaur as it walks, runs, etc. The changes would be subtle, but wrong if it was not there.

Any other thoughts? I do appreciate your insights into this.

No, I understand. I've a camel I need to revisit for similar situation.

Hmmm. Distorting at what step? In Layout? Did you set the Harness object to use the bones of the Minotaur?

All these fiddly steps that can go awry.

An OBJ imported into Daz should be as you see it in Modeler assuming you got the scaling factor reasonably correct.

Did you bring an OBJ version of the Minotaur into LW as a modeling reference for scale initially? Seems from the image that's what you did. I'm just wondering where the scaling problem is coming from.

Only other thing to try at this point is the Transfer utility in Daz.

I used the transfer utility in Daz when I did that test. Part of the problem, may be that I had rescaled the original .fbx scene when I imported the model. I had used a scale of 3.33 [if I recall correctly] when I brought it into Layout. I had then done the harness model part later in the week in modeler after using the Hub. I don't know if that has anything to do with the issue.

I can post an image of the distorted harness here, late tonight.

What I wonder is if I could just create a couple of morphs in Modeler that would handle the subtle changes in shape of the harness for the initial shots I want to do.

Of course, the above won't do for some things I'm planning, such as a fall, or trip action, where the creature would lose its footing and fall down or over.

Quite possible. There's a lot of unknows going on with Daz and the FBX export certainly.

Anyway you can get everything more in agreement in Daz to begin with so your FBX export is more like a typical Daz scene?

If your just doing stills, anything goes frankly.

Did you end up with any wt. maps on the harness in the export?

Yaaaaaaay!!!! Got it finally working.

What I had to do was to bring the harness back into Modeler and resize it there. I guess when it was brought into Daz, sized, and I did the transfer utility thing, the model was resized to gigantic size after the .fbx export from Daz. Resizing it in Modeler somehow did the trick!

I'll post pics when I get a chance. I have a lot of replacing to do in the main scene tonight.

Sorry it's been awhile, but I finally had a chance to update everyone on this. As can be seen in the pic that I've included here, I've pretty much assembled a scene that contains about 25 male and female Centaurs and a some human women as well. It will also contain human men as soon as I can free up some time to add them to this massive scene. I've had to do some client work the last few months, and haven't touched this since late December 2019.

Some of the stuff is instanced and a lot is polygonal. A lot of the initial models come from Daz with custom modeling modifications done by myself. Warning: It does contain a little slight nudity [centaurs only].

Check it out and let me get your reactions. I'll post something to Youtube when I have some of the animations rendered. There are 5 different shots currently set up, and more to come. I'll post links to those when I get them finished.

Only suggestion is try using an HDR environment for lighting id you aren't already. HDR Haven has a really good selection if you're not familiar with that site.

Thanks for the tip of the HDR's. Will look at HDR Haven.

I'm limping along on a nice HP laptop, but it only has a whopping 16Gb of RAM w/ an astounding 4Gb nVideGeForce MX250. I'm down in LA for another month or so & away from my maon system. Kinda forces you to into efficiency, but even that has limits.
Since I had to do fresh installs, I took my time & got organized this time with the Daz stuff, & figured out what was going on with older content. Don't have Poser installed, but the current Daz understands it fine once put in the proper spots.

Anyway, used some older assets & started putting together a stress test scene of sorts to see where memory limits were. Got farther than I expected actually so as long as I don't try to do as massive of a scene as you have, I can get quite a ways. 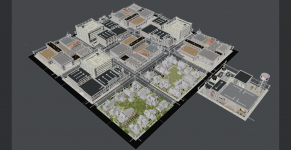 I can at least get a good start on some ideas.

I'll put up a few more pics of my Centaur City Scene later today, in case you'd like to see more.

Here are two more images from my Centaur City Scene.