My Daz to Lightwave WIP's

Figured this a better place for my earlier thread.

Between the Point Ten update and my Pitt-Bull-With-Roadkill tenacity, I've overcome a number of road blocks / short comings of exporting assets primarily from Daz via a several of its export options. It's just glorified kit-bashing & remodeling or making new where needed really.

This scene though sorta took on a life of it's own and in doing so really helped flesh out a number of issues, several of them pilot induced, but piss poor documentation in ALL the apps involved contributed to that a great deal more.

This scene started with a "well, what can I do with this set." Didn't even know if the place even existed (it does), and initially thought it on the Mediterranean Sea instead of Lac Leman (Lake Geneva). Totally different water, something I need to revisit at a later date. Turns out I was only 4 miles from Yvoire during a time of my deliberately misspent youth, & never knew it, on the opposite side of the lake in Nyon.

The ship is one I've had forever & never really looked at it thinking it just a simple object, mostly good for bg use. Turns out it's rigged with sail options, although I had to edit the morphs. And why a frigate would be on a lake is only because it looks like it should be. This is the Licorne which you might recognize if you follow Tin-Tin.

I asked my brother (who teaches sailing) what a ship like this would do in a becalmed situation to set out to sea. "Well, they'd used their longboats & tow out". OK, no problem. I've some long boats & rigged rope, and ... Wait a moment. Two boats with at least seven unique crew members each!!! Nope. Ship is now anchored & they're taking the Captain into town. 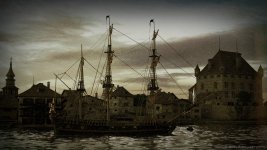 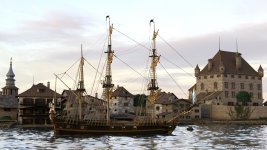 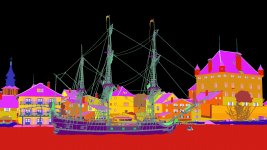 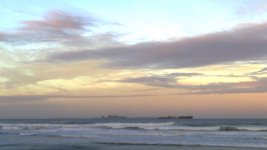 I think we ARE in Kansas...

Sort of a culmination of everything finally playing well with each other in LW 2019.1. 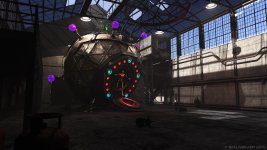 The set and pod are both FBX imports from Daz. I still had to resurface of course (OD Tools), but now I get co-operative FK rigging. That comes in handy for various hatches, door, gizmo-rotors, etc. that FK is suited for.

Android Andy though started life as a Poser 11 version asset, opened in Daz Studio 4.11, then exported as FBX which gives me basic textures but more importantly, weight mapping and selected morphs for the head. I still get the heinous FBX FK rig, but in this case it got tossed & re-rigged with RHiggit2. Including the fingers after some wt map cleanup work. So, from an awkward FK only to a customizable rig with IK where desired & Fk for other items such as fingers.

Some of these colors & surfs are place holders, (it is a W.I.P. after all). Luminous surfaces just don't cut it for me as does a glass surface with an "actual" light of some sort. Points in most cases here.

But the Orbitrode thingys are the very reason that some young, sexy & clever programmer, (although if you old farts want to jump in, go for it), really needs come up with a 21st Century replacement for the long lost & lamented Super Glow 2.

(Not to be mistaken for Denis Pontonnier)

So, something from Twenty Aught Six is gonna get the best of you?

There's probably some node equivalent that rivals the Manhattan Project for convolution I suppose, but SG2 was extremely easy to use. Pick a surface, slap it on, set a couple simple params & colors & WHANG! You had Glow! 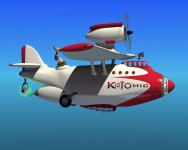 I'm seriously, almost nearly willing to consider offering some serious Bucks, Euros, Krugerrands, or really nice rare Bourbon to anyone who can come up with an equivalent. I'd just require that it gets released into the wild after the fact is all.
M

Ma3rk said:
This scene started with a "well, what can I do with this set." Didn't even know if the place even existed (it does), and initially thought it on the Mediterranean Sea instead of Lac Leman (Lake Geneva). Totally different water, something I need to revisit at a later date. Turns out I was only 4 miles from Yvoire during a time of my deliberately misspent youth, & never knew it, on the opposite side of the lake in Nyon.
Click to expand...

I was just in Nyon last 2 weeks, there is a nice music festival taking place every summer (Paléo Festival). If you like rock music and the beautiful environment of the Lac Leman region it's worth visiting!

Actually, I think we ARE in Kansas! 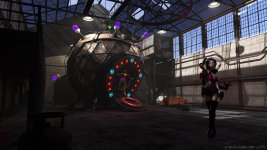 This started out just to test a few things & sort of grew. Gold Andy got RHiggitized so I can actually pose him easily in Layout now which would have really been tedious in that hatch opening w/o IK. Cap'n Annie is still just FK, but the test in this case was to see what was involved transferring a pose with wardrobe & props from FBX. Doable but not particularly efficient. Getting a little better handle on what morphs to export, but it's still cryptic.

One issue is that the FBX process embeds weight maps and no obvious way of being selective. As such, every geometry item gets every wt. map. So? Well, that adds to file size & can be quite significant, but seems inversely proportional to actual geometry poly count. The Eyebrows for example, are less then 85K in geometry, but the lwo after the FBX extraction is 705K. I severely pruned them back & now the lwo is only 31K. Same for the hair. The basic Female figure lwo is only 75K and would obviously have all wt maps, so a bit of a mystery.

But, she wouldn't be there at all if that costume hadn't gone on sale for $6, so it fate. And it wasn't the costume I was after but rather the Blaster! 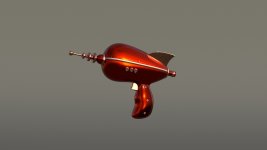 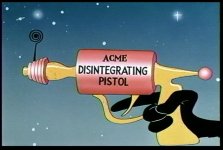 Which as been on the list to model for awhile.

I did pick up 3rd Powers Paint Weights & once I get proficient using it along with RHiggit, I think I can skip FBX entirely for characters and just go directly with OBJ as I'd be tossing the rig and weighting anyway.

I'd nothing bertter to do so started in on the Blaster & had the usual problems with Boolean work. So researched if there were some tools or techniques I'd forgotten about, and sure enough I came across erikals's numerous vids on MetaMesh. Exactly what I'd been needing. The older demo video was accelerated & a bit cropped but finally was able to see the other tools being used. After hand tweeking the font geom letter by letter so it would, Heatshrink, Sub-d & Thicken w/ acceptable rounding distortion, the rest went quickly. 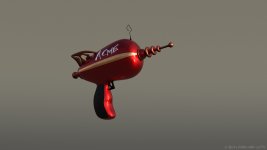 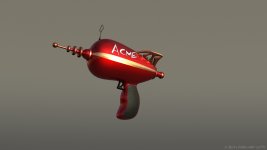 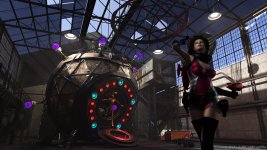