Hello
I'm trying to make a cube breaks only when It hits the floor. I created a null at the floor level, setup my cube / bullet properties with a gradient in the glue settings, distance from the null very close (+- 100 mm) and I increased the breaking angle so that the cube won't break at all outside of the hit zone.
The cube keeps exploding at the beginning of the simulation, mesh or convex pieces doesn't change a thing. It looks like It doesn't care about the gradient based on the distance from the null (whether It's in y axis only or just plain distance on the 3 axis). If I remove the gradient and leaves the glue at 100%, It falls as expected without breaking.
Does anyone has an idea of what's going on? 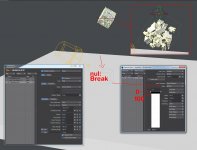 This also happened to me, mainly due to polygon errors in the model. Some parts had a poorly trimmed polygon that interfered with another part, and this caused the model to explode on the first frame. In other case some of the vertices had to be welded. Fracture causes many errors causing many problems.

I get that. but in my example, if I disable the gradient and leave the glue strength to 100 % everywhere, the cube doesn't explode and fall to the ground in one piece. It seems that the gradient in the glue channel, which used to work in prior versions, doesn't work anymore.

It doesn´t seem right that you should have a zero glue value at the start of that gradient, If I think about it..that would be the starting point from the broken pieces to the object distance null ref..which means there is no glue in the beginning of the broken pieces and thus it should explode in the start..right? that is just my initial thoughts by looking at your example..without actually testing anything.

but I don´t have the urge to test it today, butif it worked in 2015 with that setup..something may definitely be wrong.
Can you upload the scene? for me to check tomorrow?
Last edited: Dec 31, 2019

Yes, I can give you a link to the scene. But the gradient setup is always the same, right? The closest you get to the null, the less glue you have so that the parts mesh starts breaking apart. When It's far up in the air, It's obviously further than 100 mm and should not be affected by the null (which lies at floor level, at 0,0,0)... I did pick the y distance from the null in the beginning , which acts as a linear falloff, as I'd like the cube to break everywhere at floor level, but as It didn't work as expected, I switched to plain "distance from" the null, which is like a radial falloff.

Unless the gradient's null motion is taken into consideration but not the dynamix object's motion, It's world position I mean. In this case, if the local pos is used instead, yes, the gradient glue at 0,0,0 would apply to the dynamic parts mesh, even if It's moved away from It's origin.

I found an interesting thing. If the glue strength is zero, Bullet immediately applies the Collision Margin value and causes the cube to explode. The greater the collision margin value the greater the explosion. So you have to set the glue strenght in the gradient to anything greater than zero (0.01) and it should work. Or set the Collision margin to zero and you can use zero value in the gradient.

Edit:
You get more predictable result if you leave some collision margin value and use non zero value in the gradient.
Last edited: Jan 2, 2020

Guys..please upload the scene content, as I said before, I don´t think you are setting it up right, to me it sounds All wrong that you set it up to have a zero value in the Glue strength, at the beginnin of the gradient, take note ..the gradient you apply this effec t to..is the broken part, not the null...thus it will explode directly when you start the simulation since it is from this broken object the gradient goes to the null distance, not the other way around...so it is no surprise it will just explode since it isn´t glued together in the beginning.

I could be wrong..but that is the impression I get when I look at the images, and how I think I treated it all when doing the sims.

kolby said:
I found an interesting thing. If the glue strength is zero, Bullet immediately applies the Collision Margin value and causes the cube to explode. .
Click to expand...

As I said, of course it does, you can´t have it unglued at the beginning of itself, which the gradient I think is counting on, you apply the gradient on to the breaking object..with a distance TO the null that is supposed to unglue it, not the other way around.
The zero starting point with zero glue, IS the broken pieces, Not the null object.. so no wonder it explodes directly in the simulation.
Last edited: Jan 6, 2020

Ok, I made a short video to explain the way I understand the distance from null glue trick and what is in my opinion not working properly:


You are so responsive in any matter or question, It's a pleasure to be part of the LW community.

And this is the continuation, with the problem when moving the cube instead of the null:


I apologize in advanced for any damage caused to your eardrum by my french accent.

marchermitte said:
And this is the continuation, with the problem when moving the cube instead of the null:


I apologize in advanced for any damage caused to your eardrum by my french accent.
Click to expand...

Ok..I understand the point you are trying to describe now, I need to set it up myself though and fiddle around to see what´s going on.

And for your french accent, it was perfectly enjoyable and hearable, and the accent wasn´t anywhere near Tchéky Karyo in addicted to love for instance, though I loved his swearing in that movie.

Happy to know that I beat Tcheky Karyo on something!
A while back I had done an introduction video for my tutos (specific chapters were to be added on the blank part for every tuto), never used It but if you look carefully at the beginning, try to stop the video and read what's on the book cover.