Hi LW Users...
I have a question and i would like an answer if you can. Everyone who works in the CG/VFX Industry know the ACES workflow.
If you dont know ACES look that...
https://www.youtube.com/watch?v=vKtF2S7WEv0&t=863s
My question is simple.

drako said:
Hi LW Users...
I have a question and i would like an answer if you can. Everyone who works in the CG/VFX Industry know the ACES workflow.
If you dont know ACES look that...
https://www.youtube.com/watch?v=vKtF2S7WEv0&t=863s
My question is simple.

Playing with Renderman, and just saw the difference with aces, and indeed, LW needs to support it.
S

I'm very interested in understanding from you guys, how ACES for LW would differ from LW's existing in Linear Workflow system in a practical sense.

Admittedly, this is the first time I'm hearing about ACES and am in no way an expert (I'm barely a novice) but I did read this article which helped.

I've always found this video helpful in getting my mind around the whole thing.
https://www.youtube.com/watch?v=ehztMYhEN8I&feature=emb_logo
S

gdkeast said:
I've always found this video helpful in getting my mind around the whole thing.
https://www.youtube.com/watch?v=ehztMYhEN8I&feature=emb_logo
Click to expand...

Are you saying that an ACES workflow in LW would work in the same way as the Linear workflow we already have?
T

Colourspace is both a black art and minefield to me. I'll share my "understanding". Different video types have different names based on hiow much colour they are technically able to display. So standard definintion is called Rec 601, HD is called rec 709, and 4K is Rec 2020(?) and digital cinema films are DCI-P3 (?). There is such a thing as primary colour grading for technical accuracy, then secondary colour grading for artistic effect.

But what I can't navigate is that, say I made an image in photoshop, then shot some video, then made a character in Lightwave and wanted to put them all in the same scene. Each would presumably be it's own colour science which would have to be unified in some way with "one colour to rule them all". But the display device would also have to be answerable so one could trust what is being viewed. And should the camera video ideally be shot raw or log, and encoded to what ? DPX ? Something else ?

I'm only waffling on about it because others may have the same confusions with some hesitation to admit (human nature being what it is ). What is the one mystical colourspace to rule them all ? Is that what aces is all about ?

LightWave 2020 has a tone mapper as a pixel filter, meaning it can be used with VPR. Using a tone mapper is only useful inside LightWave if you don't intend to work on the image post-render, if you are doing no compositing. 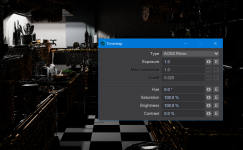 Render output needs to be able to save acescg, half-float ideally...which could then be imported as a sequence into Resolve or some other software.

Render output needs to be able to save acescg, half-float ideally...which could then be imported as a sequence into Resolve or some other software.
Click to expand...

So long as LW2018+ encourage LDR limiting on HDR backdrops/textures to prevent specular fireflies (esp. from rough refl/refr), having LW load and/or render content in ACEScg (or Rec2020, for that matter) seems likely to cause at least as much harm as benefit.

As already noted, that's not the same as a proper ACES (ACES2065/ACEScg) workflow.

See this article for a reasonably concise explanation. A key part is where they mention about how even in so-called "Linear workflow" the color primaries are typically sRGB-derived, and why that makes working in baseline ACEScg superior for CG work.
Last edited: Dec 30, 2020
T

one of these days everything 3D and everything Video will be made easy.

I didnt (and prolly still dont) til I saw a chart showing the differences between color spaces.

Seriously, if you look at the article I cited above ("Idiot's Guide to ACES", link below), it does a reasonably good, concise job of explaining how it all works (as well as specifically how ACES is superior to a "working in Linear" approach).

The main thing to understand is that a proper ACES workflow removes the need for most manual adjustments of input, view, and destination color spaces/gamuts, and replaces all that with a direct, reliable, standard and (somewhat) future-proofed approach to color spaces/gamuts. The inevitable popularity of UHD displays built around Rec2020 gamut standard (much broader than either sRGB or Rec709 gamuts) ensures proper color space/gamut handling will only become more important in the future. ACES support/integration mitigates a lot of that pain.
Last edited: Dec 31, 2020

Short answer: It can.

Your question is like asking whether "DNA includes hair color information". Yes, arbtrary configurations of DNA can be used to encode hair color information (or not), so "it can", but even applying the context of "DNA as genomic storage" as given, the question itself still suggests a misunderstanding of the relationships involved.

LUTs are just a means of transforming one value to another, whether for color space/gamut transforms or whatever. If the transform they contain is one which involves application of gamma adjustment, then yes, they contain and their transformation affects gamma info. The important take-away is that LUTs transforming color values between color spaces/gamuts only carry/affect gamma info in cases where the transform in question requires it. That's often, but not always, the case.