hey, if you use unreal/substance/3d coat etc there is an option to pack your linear pbr textures to a single image.

one rgb image with ambient occlusion in red, roughness in green, metallic in blue or a variant thereof with the ao, roughness, metallic swapped around.

this reduces memory but also reduces complexity and files.

it’s much easier and nicer to drag one file in and have it hook up automatically to all of those pbr inputs. more so as substance and 3d coat auto generate it too.

i’d like to be able to do the same in lightwave, especially since we have an unreal material but also for the principal material as it’s so much easier to only have one file in addition to your normal map and col map when setting up surfaces.

i don’t see an option to do this in lw in the image nodes. rgb is one output.
any ideas there on splitting the col to respective rgb outputs ?

Vector scalar node... X, Y, Z = R, G, B. However you dont need one for the R, as plugging a vector out to a scalar in will use only the first component of that vec.
S

..and remember about color-space in Image Editor.. if you packed other data in image file, color space transformation should not modify data..

..and remember about compressing in lossless file format to not modify data.. e.g. JPEG is optimizing compression to store RGB not something else.. 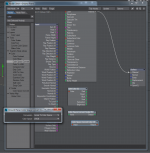 Tim Parsons said:
In 2019.1 these are now available in the image node.
Click to expand...

yes, a great addition, maybe someone read this?