how to get rotational value from an IK chain bone in Lightwave?

Hello there
I'm trying to automate the colarbone raising as the arm of the character moves up. Easy with a gradient on a scalar node with a gradient, imput the rotation of the upper arm . Now that works if after IK is chacked but then, the arm jumps away from It's IKgoal, naturally, as the collarbone raises AFTER the Ik. What I'd need for It to work would be to extract the rotational values of the upper arm , as It's animated via IK, the data is not available when plugged into the scalar gradient. That OR animate via FK. 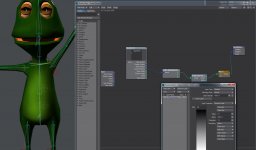 I found a way. I used DPkit bone info instead of the native LW bone info, the world forward connected to the split node and scalar gradient with after IK turned off (in the nodal motion options - double click on It-) gives the world rotation of the upper arm bone, driven by IK.
Thank you Denis!