It seems like it should be possible to use something like particle generators to bring about refraction of light as seen in the exhaust of a jet engine. Though the gases are mostly invisible, they refract light because their refractive indices are lower than air. I saw this effect on a Hitfilm demo and it seems it should certainly be doable in Lightwave.

Just use a transparent cone, with a turbulence texture applied to it's refractive index.

You need to fade the refraction to 1 at the edges, otherwise you will get a hard edge and that will give the game away!
It's animated, just make a preview.

Stuck in a very big cube

Man, if I were the Borg, I would assimilate you XswampyX.

You could use particles too, make sure to use the hypervoxels surface mode, 100% transparency, refraction 1.1-1.2, and add a turbulence effect or maybe some other fractal on the refraction as well.
Also ..use the hv shaders tab and use edge transparency, see image for some settings. 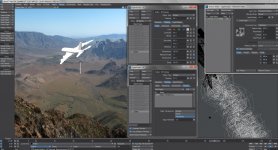 There is also a heatwave plugin part of the worleys Taft collection(commercial) for similar stuff, Haven´t tried it though.
http://www.worley.com/E/Products/taft/heat_wave.html

It might be possible to connect air refraction to a particle layer in Ogo taiki too, not sure though..it works on layers for air/heat refractions, so I don´t think it should be impossible, it might however take much longer to render...check the picture and movie below the above earth cloud samples
http://www.asahi-net.or.jp/~pq1a-ogs/taiki_e.html
http://www.asahi-net.or.jp/~pq1a-ogs/air.mpg

Edited...Note I forgot, you can´t use image composite background since that won´t recognize the refraction taking place, you need to apply the environment with a sphere, or a backdrop plate, or use textured environment and use an image map, or use Sibl, or lightwave image world.

Waves of light said:
Man, if I were the Borg, I would assimilate you XswampyX.
Click to expand...

Thanks, I think? We only wish to raise quality of life for all species.

We get a fair few questions on making flames, jet engines and explosions, but I don't think the refraction of the air often comes into it. Maybe it should?

Stuck in a very big cube

XswampyX said:
Thanks, I think? We only wish to raise quality of life for all species.
Click to expand...

Nope, just your brain will do, thanks.

another method may be the use of lights - see preset central.
I remember splinegod did a good tutorial on this, but can't find it.
http://www.presetcentral.com/preset/browse/

BokadCastle said:
another method may be the use of lights - see preset central.
I remember splinegod did a good tutorial on this, but can't find it.
http://www.presetcentral.com/preset/browse/
Click to expand...

Doubtful that would give any distortion of environment such as heatwaves does, there´s no refraction taking place with lights or volumetric lights., might only be working for actual heat engine exhaust, but not the rest.
If not old sorely missed splinegod had some special trick for it as you said.

I use hypervoxels with a clip map or instances with a B&W clipmap (white points over a black background in instance) emmited by the engine with the scene in matte objects and black background to render it. That render can be used as a displacement layer or node in pospo. You can adjust the level of distortion without rendering again

I saw a tutorial on this a long time ago ... and from what I remember, the particles were rendered in it's own pass and taken into post (Adobe After Effects). This Hitfilm tutorial kinda reminds me of it:

Yes. I saw it in a Ben Smith from Redstar tut (Total3D)

thanks,
still a nice technique...

What I want to know is if there is a way to create the heat reflections? seen on hot roads as you drive down them?

should be the same thing.

JamesCurtis said:
What I want to know is if there is a way to create the heat reflections? seen on hot roads as you drive down them?
Click to expand...

Not sure it should be referenced as "heat reflections" it´s air refraction which yields the effect opticly, though the physics is probably sort of reflecting the heat from a surface.

Use a flat poly in front of the camera, 100% transparent, I would go for standard default material even if in 2019 and above, so it will be easier to access the textures.
1.1 refraction perhaps, and in that refraction channel use a texture, like turbulence, add a ripple texture beneath that and set that to displacement so you move that turbulence texture with the ripple fractal which is built in animated with the speed of the waves, another gradient layer on top of that can determine which part will be displaced as "heatwaves", you would probably use a ref null and target that with a gradient as Y distance to object ref null, or use an image gradient perhaps.

That should yield an effect of vibrating heat on a road.
Ogo taiki had this "air refraction" for "real" within it´s volumetric engine, but also slow to render, and it´s not possible to use with lightwave 2019 up since ogo wasn´t made for 64 bit only software in mind.

so hacking it 2D on a polyplate in front of the camera will probably work, you could probably just do it in post as well with some displacement in fusion, after effects as well.

for my tests, the problem is..we rarely reach those temps here, so my reference is very much restricted to what I´ve seen in movies, or other vids and not real encounters of the natural phenomena.
Only a few summers that Ivé seen the asphalt beeing so hot that the air vibrates.

erikals said:
should be the same thing.
Click to expand...

erikals said:
should be the same thing.
Click to expand...

Ah..thought what you refered to was used particles, so I missed the post before that with a similar setup with a transparent cone.

Though I think the sample Xswampy described is missing a crucial part. just slamming on a turbulence texture on the refraction channel like that, without the fractal moving at all and only have the hypervoxels or other jetstream fire looking doing the motion, it looks wrong, and static to some degree, you really need motion on the fractals itself, that´s what I used on my little sample there in the desert, two textures, one turbulence, and a ripple fractal set as displacement under that texture to undulate move it with animation.

Take a closer look at the sample you posted and see how theres a kind of static displacement on top over the actual movement of the fire, the refraction itself doesn´t produce any movement, which it really should.

There may be other textures with pre-build animation in them as well to use as single textures, depends on how fast and well you know to handle them and their typicle style attributes etc.

Only 18 degrees + Celsius today over here, I may get a pre-tan at most, heatwaves opticle refraction won´t happen here unless reaching maybe 32 degree´s, and perhaps only possible in mid July.
Last edited: May 30, 2021

Only 18 degrees + Celsius today over here,
Click to expand...

too early, it will rise.

a closer look at the sample you posted
Click to expand...

Absolutely, just a rough render and test by Swampy. Not accurate.

just bought this btw, quite "Scandinavian" 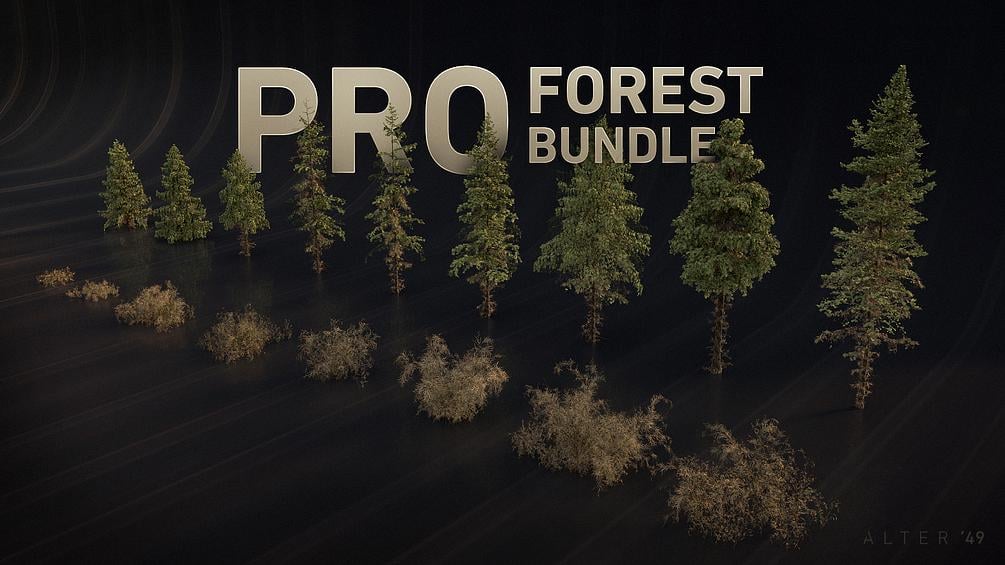 ALTER '49 - PRO Forest Bundle - includes just some of MANY production ready assets we're creating for our upcoming student short film. ALL assets we create for our project, will be available for you trough Packs, each for only $117 assets in .OBJ format4K textures Diffuse, Gloss, Normal...