As Marcus requested, here's some of the LW based stuff I've been working on for a game.

I've pretty much finished this model, and now I'm on to texturing it. I'll update this thread again as I progress. 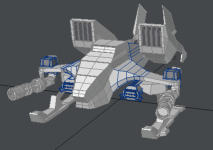 A very minor update on the CloudHopper in Ghostblade. This is a support aircraft designed to basically evacuate small groups of people and GTFO.

It's called the CloudHopper because it doesn't fly so much as fall out of the sky, land, then jump really high again. And the two side mounted guns can pivot around, giving the aircraft 360° of covering fire. 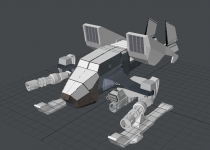 Love it! Using any cool programs to do the texture / UV work or just native LW + Photoshop?

Looking good :thumbsup:
How will you be exporting for a game?

Any progress on this?
Just wondering if you could share how you export for a game?
Will it be for Unity?

How it's going with model?

Here you have free version of DDO and nDo2:
http://gamebanana.com/tools/5612
http://quixel.se/nDo2/nDo2_release.exe