Was following a plasma tutorial by Hawaii Film School on youtube and after experimenting somewhat, I ended up with my version. Used the volume primitive. And as usual, I had to have stars in the background. Used the standard Star Sphere method. That never seems to go out of style.

I add here a note or two about the rendering:

I wasn't getting an alpha channel on the Volume Primitive so to achieve that I rendered the sequence once with Stars only and once with the Plasma (volume primitive) only. But I added "Flare2Alpha" in the "Backdrop/Processing/Add Image Filter" tab on the Plasma render sequence. My first renders had the background stars showing through. It annoyed me a lot.

I assembled it in After Effects which I barely understand (amateur) and wanted a LOT of motion blur on the stars which I could never figger out.

To speed the render up a LOT, I reduced the camera Maximum Samples to 4 from the default of 8.


Just rendering another fullHD tweaked version (can't let this one go...having WAY too much fun) now. If it finishes before I pass out I'll post tonight. :caffeine:

PS> I just know a veteran will pop by here and give me an awesome tip to make this easier for me than my hacked (hey, we like doing that in LW!) way of doing it. :rock::bowdown:

Might be done with the plasma blob in space idea, or not. We'll see. ;D

Never heard about a plasma blob in space before, but there you go..the universe is full of strange things

As for your samples, i think you need to convert to better quality..then again, youtube can be tricky and destroy some of it.

Also, look in to the dponts later updates for Rman collection and check out the warp procedural, it´s great for the kind of undulation whispy plasma stuff, it includes several types..on warning though, it can be slow to work with when rendering..
https://dpont.pagesperso-orange.fr/plugins/textures/Warping.html 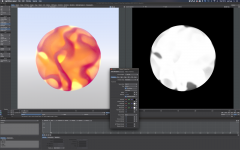 Volumetric primitive attached to null, alpha is clearly there, object render settings alpha is set to 'surface settings' where your stars on a plane or geometry behind the volume if so set it to constant black, export using buffer export in 32bit models in EXR or Radiance, set AE to 32bit from top left of screen where it says 'Project", right click to reveal menu and choose colour settings select 32bit mode, for your BG plate type bloom int the search field of the effects list and and choose one, bright+darks is good, select single axis vertical and play with settings
Last edited: Nov 18, 2020
S

So maybe I'm NOT done with my fun plasma blob after all.

prometheus: I have subscribed to my own thread so I can check out that warp procedural when I'm ready to fiddle again.

gerry_g: I checked and I'm still not getting the alpha that way. I'm gonna leave that "flare2alpha" on there until I figger it out. 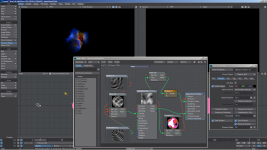 Thanks for those tips, guys. More to play with now. A bit tired tonight to mess with it but perhaps tomorrow. I blame all the fun I'm having on Hawaii Film School guy. :rock:

So, with regard to adding motion blur to the stars in AE, it depends on how you've added the stars.

If you've added them in AE, and are animating the stars inside of AE (moving a layer with stars on)… you'd need to use the layer blur effect. This is only for when animated things are moving inside of AE.

If you've got the stars animated as a sequence output from LW, or something else... so they're a sequence of frames you've brought into AE, then you need the pixel motion blur.
This will interpolate your frames and blur the betweens.


Hope this helps a bit?
S

gerry_g: I now changed AE to 32bit. Didn't have good luck yet with the Bloom settings, either. Hmm. My starfield was made using standard LW Star Sphere with my camera and plasma null objects in the center. The stars render out as pinpoints (since the 1 point polys) but I brightened them considerably with the "Exposure" effect. Still trying to get a decent blur. May have to go a different route for the star field. Perhaps my StarPro plugin (didn't have it installed in this LW version yet. regretting that now LOL) or what lardbros proposed.

lardbros: I'm using Production Premium CS6 for my AE version so I don't have that Pixel Motion Blur effect. However, I DO have the latest CC Photography Plan so I'm gonna peek in Photoshop to see if I can run it through there for possible motion blur goodies...

Playing with this at the moment...

PS> Having fun in LW never gets old, especially for an amateur...
S

I'm also trying a new idea with the starfield: Rendering it at lower resolution and then I'll upscale later to make the stars larger.
S

Tried the motion blur in PS but you have to set the angle manually. Didn't like the results. Blecch!

I liked the upscale idea I had, though. When doubled from HalfHD to FullHD in AE the stars were thicker and I again used the Exposure effect to make it better. Still not the greatest result, though. I only rendered a few seconds to save time. Just saw the "Echo" effect in AE now and was reading about how to use it on Adobe. Gonna get a cup of hot cocoa going and get at it.

I'm obviously having a blast with this despite it being of no importance other than my pure amusement/entertainment. :rock:

So I made my final render (for now LOL) and was happy with my star trails look. I used "Echo" effect in AE to do that. I might look at those Rman procedurals next...

So maybe I'm NOT done with my fun plasma blob after all.

prometheus: I have subscribed to my own thread so I can check out that warp procedural when I'm ready to fiddle again.

gerry_g: I checked and I'm still not getting the alpha that way. I'm gonna leave that "flare2alpha" on there until I figger it out.

Thanks for those tips, guys. More to play with now. A bit tired tonight to mess with it but perhaps tomorrow. I blame all the fun I'm having on Hawaii Film School guy.

In case you never figured this out. I was just playing around with the same set up and couldn't figure out how to get an alpha channel without using Flare2Alpha. I've figured it out. During the tutorial both the Scattering Scale and Absorption scales are set to 0. If you add any positive value to either setting you will get an alpha channel. Thats why you can see the alpha in gerry_g's screen shot. So, there you go