Back in December 2018, I had this idea to make the North Mountain and Elsa's palace from Disney's Frozen....and then as I was thinking about the project, I got hit in the head by a lemon, wrapped around a large gold brick and decided to actually do a complete animation of the Let it Go sequence...Figured this would be a good project to really push everything Ive done in 3d from character animation, cloth, materials...So..I started on it and since then I've been working on getting it all together....

I started with the mountain...Roughed it out in Modeler, then took it into Zbrush for refining and detailing..I tried many ways to get a good set of distant mountains from Displacement, to Terragen and Gaia..finally ended up using a DEM that I stretched in Modeler and also imported to Zbrush for modifying and painted it all. 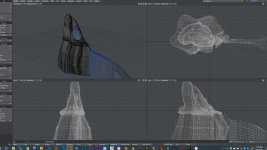 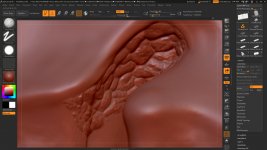 I have since then set up the opening shot. I used volume objects for the clouds. The sky clouds were just a skytracer generated texture mapped to a ball.
In all the shot takes about 10-15 minutes to render at this stage (on my 16core Ryzen). Pay not attention to the visible UV seams, I made a mistake and used a baked texture for that shot)..

While working on the mountain, I took a little bit of time to begin making the Coronation and Snow Queen dresses. I made the initial patterns in Marvelous Designer. Final will have the upper part all animated in Lightwave, and the skirt parts animated in Marvelous. (more on the dresses later)

Of course I have done a complete (perhaps overdone) build of the palace from bottom to top (the following renders are from different stages of material creation.
Getting a good balance of looking like ice, being near opaque in areas and clear in others while also keeping render times from skyrocketing has been a real challenge...still work to do in that area for sure..

I have also been working on the rigging for Elsa. I originally started with a skelegon rig for the body, then used a Genoma rig, but I need a bit more control, so I've gone back to class, as it were, and got the Rebel Hill Rigging videos...Started with the head rig (pictured is v1 of what I came up with after going through them....now working on v2, which expands further and will allow me oodles of control...once the face is done, I'll move back to rerigging the body, because I need some controls, such as changing pivot from one foot to another while spinning the character. 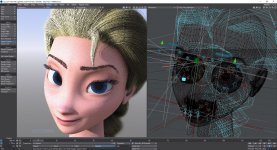 Oh, if you thought I would be having a bald character...I give you the near final hair. Used a combination of splines and polychains (for the braid that needs to be rigged for dynamics). The total count comes to around 40k strands for each hairstyle. I will be working on the brows and eyelashes next which will also be fiberfx.

Render time on the hair came in around 10 minutes.

A little more on how the project will go....

Im shooting for November to have it done, to coincide with the release of Frozen-II (and no I wont bet on it, cause rendering alone is going to take about a month).

I have more information and videos on my youtube channel and I will post new things on my Patreon page before I post here (links below).

Quite a nice progression in 9 months Rob. Must feel good.

I'm going to dig out the RHiggit2 vids & brush up that myself soon. So how well it plays with 2019.

I never used RHiggit..Im sure he's made an update to work with 2019. The videos on rigging though are awesome and in depth.
R

That is quite a task and some very good work... looking forward to seeing the end result!

Make sure to give this a look for some ideas of the kinds of controls you might want to implement..


Also, tbh, given LWs wonderful hair tools... if it were me Id just go for modelled hair 'solids' textured to look nice.

Yep, I been thinking of what controls I'm going to need as Im going along..that vid does show some I hadnt thought of as well. The eyelids have proven to be a challenge since they are angled..so I've done chains there (and adding expressions to move certain controllers automatically).

I considered a modeled solid hair textured in zbrush with normals to simulate the strands, but decided I wanted to use FFX on this..and I'm happy with the result so far.

I never used RHiggit..Im sure he's made an update to work with 2019. The videos on rigging though are awesome and in depth.
Click to expand...

No need. Seems to be working just fine in 2019.1. Having the ability to jump in & out of the rig mode to change & tweek in of itself is a huge feature. Had to do a bit of a backtrack as adding Digits or Fingers later to an Arm set up behaves a bit different. Pretty straight forward but rigging the hands is tricky mostly due to visibility. No easy way around that when you can't selectively hide geom.

Finally got the controls positioned but some bones hadn't gotten assign wts, & some of the geom was sloppy with wt. painting. Anyway, cleaned all that up & got the fingers even to work which I've never been able to do before. 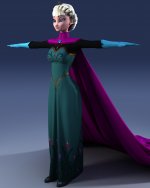 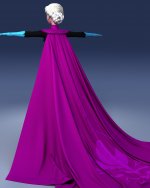 I created all the patterns and simulated in Marvelous designer. Created all the embroidery in Photoshop..and of course, brought it all into Lightwave for rendering.

After alot of work trying to get a good simulation in Lightwave, I've decided that MD is going to be where I run all the cloth sim for the project.

Looking nice. I sort of came to the same conclusion about using MD for a problematic, rather obese character I've been working on; overlapping geometry in the upper arms/ torso areas. So, I need to really buckle in & learn MD in order to clothe him properly when it comes to multi-layered wardrobe.

Might be nice if a separate MD thread got started at some point perhaps.

Unfortunately, life seems to have a knack of getting in the way occasionally. I have to take a hiatus from retirement for a few months & return to Tinselburg in a few weeks (that's LA to most folk). That will mean being away from my studio system & all my graphics apps.

I'm anticipating a serious Jones that I hope I can ride out w/o too much stress, but it's gonna be ugly at first I know.

Blimey... What an undertaking! I'm impressed with what you've got so far, and using fiber fx is definitely a challenge, but it looks pretty decent.

Can't wait until you start showing some animation, this is going to be cool (excuse the pun)

Thanks. Yeah, its an undertaking for sure..sometimes I think maybe I shoulda chosen to hit my head with a sledgehammer...but too late now..lol.

I've started blocking the cameras, built a simple dolly rig to handle some of the complex movements (yeah, just using the camera's pivot dont work from some movement)...
More will be posted on that later....

Snow Queen dress is next up, to get that all finished. The bodice is a pain because I have to have all the tiles, while looking good and not bogging the puter down too much.

Was working out a problem with FiberFx stalling a render and decided to play with hair surface a little bit while I was at it....

Posted a full cloth test of the coronation dress.

Been working on getting the bangs to obey dynamics..without diving into the forehead and getting stuck.

some jitter on the cape there, have you tried Syflex?

I tried the syflex demo, but it was too finicky..one thing selected in the wrong order and you had to start over. Maybe it was a limitation of the demo, but I also couldnt get it to do a simulation again. So at this time, not worth buying it.
I already have Marvelous Designer, which is fast at simulating, the only drawback there is I have to make sure the LW object is exactly what MD is using because of the MDD.

Both LW's old clothfx and bullet also couldnt rise up to what I need. hehe.

https://www.google.no/search?&q=Marvelous+Designer+jitter
Do check at the forums how to get rid of jitter perhaps.

Yeah, its an annoying problem..luckily the cape is only needed for the first minute...lol.

Thanks for the link...ive looked and prolly just never googled the right term.. MD does do conastant evaluation and eventually one garment will find a way underneath another..or even itself, and its hard to pull a garment out of itself..lol

I've reduced it to where I only need to do the cape and skirt, and have a special bodice made just for the MD sim.

Just a quick segway to making the one of the last few assets I need.... Olaf....
He's not very detailed, since you only see him from the back for a total of 66 frames. Rigged him so I could move and scale each part, used controller nulls parented to base nulls as constraints for pos, rot and scale so I could just move them to their start position at frame 0, then easily reset them all at once on the last frame...and then tweak the inbetweens.

The particles are pretty easy peasy..just emitters with instancing so that each one is a separate snowflake with random spin, size, etc. I may make a couple more flakes and then figure out how to randomize the instancing (if it can be done)

Here's a couple of pics...I have a quick video on my yuoutube (but thats only visible to patrons right now) 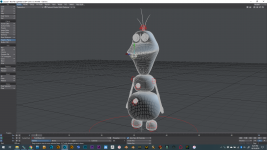 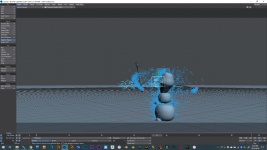 Been a hectic month, dealing with family issues and stuff..so I kinda got behind a bit. Anyhow, heres a brief update....

Worked on the rigging..over engineered it a tad, so stripping everything back that I dont need, such as some nifty IK/FK snapping, which was causing some issues and cyclic dependencies when I would put in the controllers...so I'll be going back to using LW's standard IK/FK switching, since I only need IK on the arms for a couple shots.