Free LScript plugin: Legato MIDI keyboard.
The plugin is almost finished and will be published slightly later, including some demo files to get started.
Some minor bugs to fix, and maybe adding the ability to Save/Load plugin data with the scene.

Legato MIDI keyboard has been inspired by the Pixar Soul production: controlling a virtual keyboard by a MIDI file.
The technique has been used to guide the animator to use the correct keyboard keys at the right moment.
Of course it can also be used to control a virtual Pianola, or any other MIDI/DMX controlled virtual effect.

Note-On and Note-Off data is used to add keys to the appropriate item envelope, and optionally to its Dissolve envelope.
To simulate a real physical keyboard (presets for Grand Piano, Organ, Hammond B3, Custom) the speed of the key movement can be adjusted, including the electrical switching point. The default speed can be modulated by the Velocity value (of each Note-On event) from the MIDI file.

After MIDI Envelopes have been initialized, they can be filled with data from an external MIDI file.
Use other software like Reason Suite 11 (or any other) to record/edit a keyboard performance and export it as a .mid file.
For now my plugin is only compatible with Allegro MIDI files: simply drag a .mid file to Audacity and export it as a (human readable) .gro file.

The MIDI Envelopes can be transfered to numbered Items: Nulls or Meshes.
It has a built-in "Null Keyboard" generator.
The plugin handles multiple keyboard hierarchies.

It's an additive process: you may select certain tracks to be added to the MIDI Envelopes and/or Bind Channels.
Instead of using a Rotation channel (Pitch), you could also select any other Position, Rotation or Scale channel.

MIDI Envelopes can be transposed up/down while transfering them to the keyboard hierarchy.
For example to fit the performance (single or multiple tracks) on a smaller keyboard.

Also, you could "Show" active keys and/or "Hide" active keys: if you create two sets of keyboard hierarchies you can change the color of the keyboard key when being played.

Load a .wav file in Layout to verify that your virtual keys are operated in sync with the music. 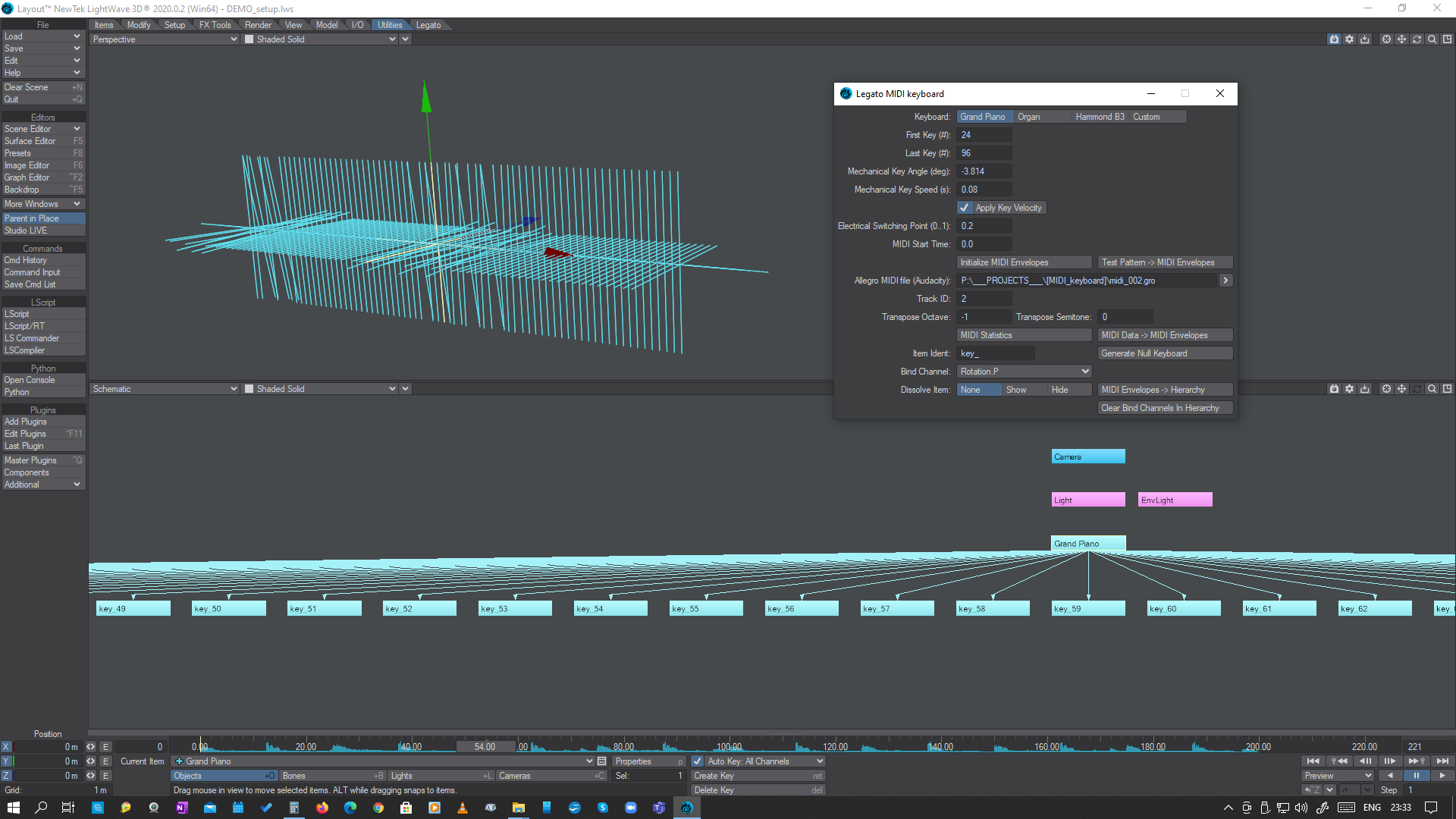 Sounds...cool, will have to take a look once you are posting the plugin.

Looks neat, not sure if i will be using it (time etc) But nice stuff !

This is very cool. I look forward to playing around with this.

Download the attached ZIP file and copy the "midi_demo" map on your project drive.
It contains the .lsc plugin file for LW2015 .. LW2020, a readme txt file with a basic procedure.
The "midi" map contains a ZIP file with the original Reason setup, the .mid export file, and also the .gro file as exported from Audacity 2.4.2 (v3 is already available).
These files contain just a few simple notes, nothing commercial.
The "audio" map contains a 22,050 Hz stereo 8 bit WAV file. I've reduced the quality to keep it compact.

I've had to expand and reorganize the interface a little, and I've managed to move the most important buttons to the right side. 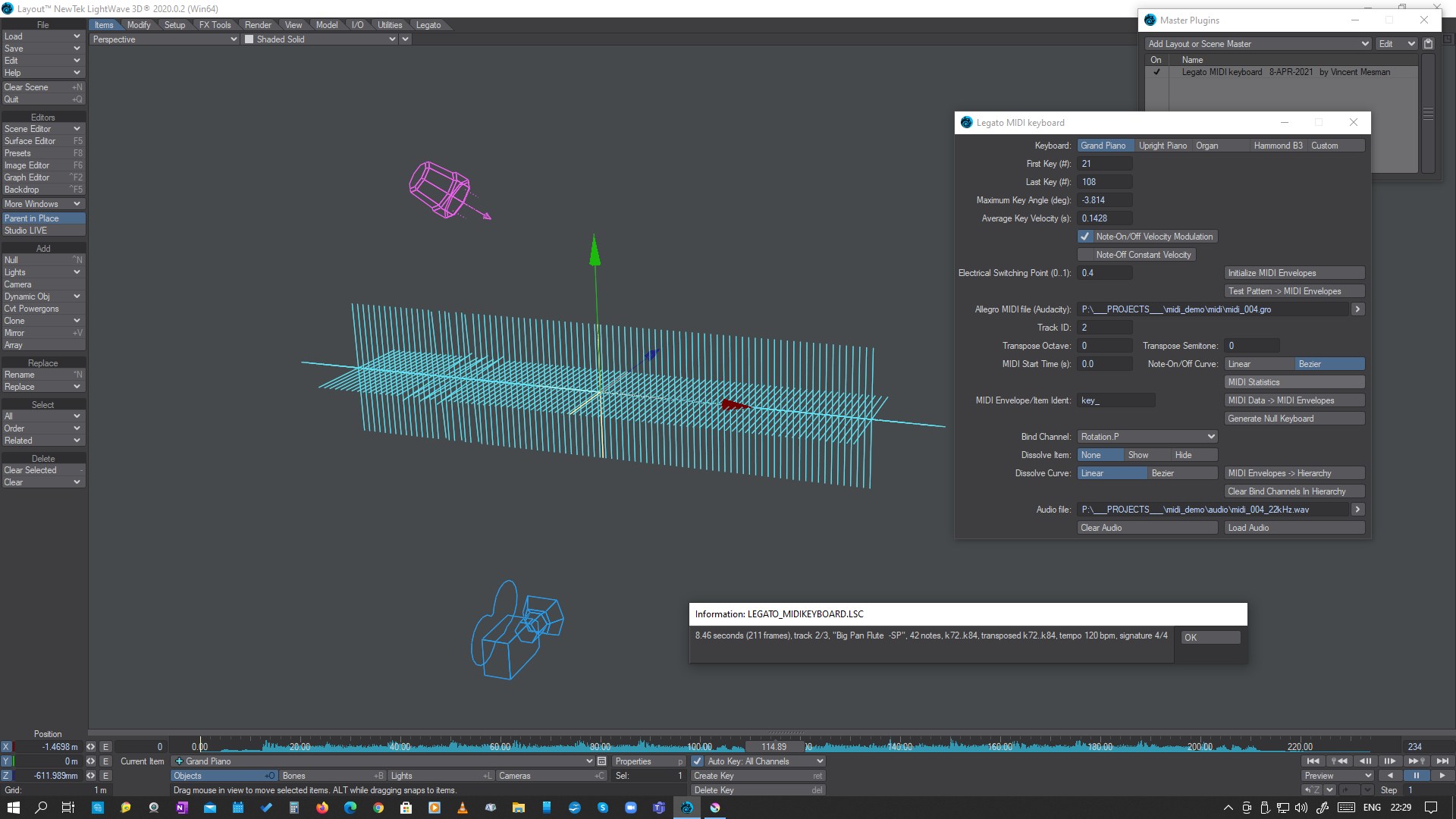 Since the plugin location and project files in your setup can be slightly different it does not make sense to add the scene files in this ZIP.
Follow the steps in the read me file and you'll be fine.

In general, the plugin expects you to:
All parameters are saved in your LWS scene file. This makes it easier to recreate a certain setup.
Very short notes (Rhythm sections or after slicing notes in the editor) are handled.
Overlapping notes are handled.
Notes with duration 0 (at the end, the note-off event outside the selected region) are handled.
Note-on/off keys will use Bezier type of curves by default (except for the overlapping keys).
Dissolve keys will use Linear type of curves by default - use this channel to hide/unhide two sets of keyboard keys with different colors to mark active keys by color.

Let me know if you encounter bugs, have questions, or maybe you have remarks about the keyboard presets.
If you want to share 3D models of your keyboard, please do.

Please remind to Export individual keyboard key layers to separate Object files [EDIT: THIS HAS BEEN CHANGED IN VERSION 9-APR-2021], and give them one single parent in the Scene (just like the Null keyboard).
The plugin needs the parent to find its Child Items.
Last edited: Apr 9, 2021

If anybody is wondering about the potential of this nifty tool... https://www.youtube.com/user/AnimusicLLC

The inspiration for this plugin came from this:

Also moved the Ident data field to the "Initialize MIDI Envelopes" button level,
because the init function is the first function that is actually using this field.

Reminder: you must select the master or (any) child item before you
press button "MIDI Envelopes -> Hierarchy".

I've updated the ZIP in the download link, available in message #6 of this thread. 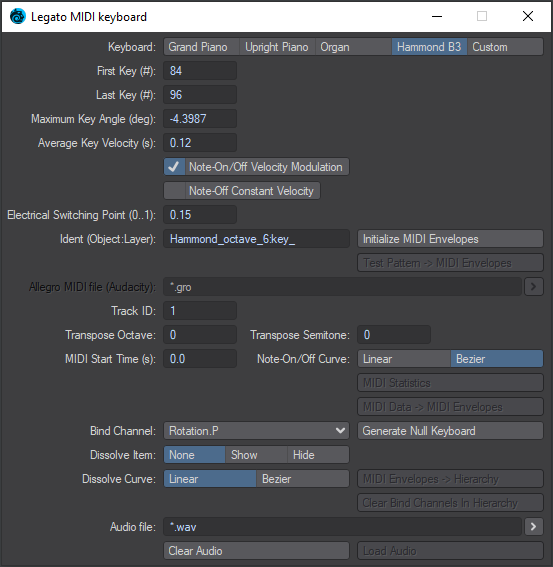 Btw, I can spot another bug already. Can you?

Hey, you have made a very interesting plugin. Just today I was thinking to animate a keyboard with midi file, asked in a FB Group and they showed me this link... GREAT! I just tested your plugin with the Null Keyboard and it seems to work. However, I don´t understand completely right now how to use it with a keyboard model. Would it be possible to add an example scene to the plugin or could you create a video tutorial? Actually, I would love to do an tutorial or example video of your plugin myself, I just would need to completely understand the plugin and how to work with it.

Question though, this seems specific to a keyboard animation. I am unaware of if it exists, but is there a generic MIDI plugin for LW that lets you load & examine a MIDI file and generate envelopes or drive any animations from it?

The trick is to add the name of your object to the Ident, separated by a colon symbol:
myObject:myLayer
For example: Hammond_XK-3c:key_
and don't forget to parent all layers to a single parent.

If you put every keyboard key in a dedicated object, you can name them key_#
Replacing # with the key number.
Use Ident key_ and and parent all objects to a single parent.

The single parent is needed to process all child items.
The Ident is used to identify each individual key.

I've written a simple tutorial to get started:
http://home.kpn.nl/vincentmesman/midi.html

And I'm also preparing a video that demonstrates the transfer of MIDI note data to a keyboard model.
Stay tuned.

Question though, this seems specific to a keyboard animation. I am unaware of if it exists, but is there a generic MIDI plugin for LW that lets you load & examine a MIDI file and generate envelopes or drive any animations from it?
Click to expand...

I did find this: http://interialabs.de/lw/lscript/midi2lw.html but I haven't tested it.

For me, the biggest challenge was to handle the note on/off data and send it to a set of keys, controlled by a friendly interface.

Question though, this seems specific to a keyboard animation. I am unaware of if it exists, but is there a generic MIDI plugin for LW that lets you load & examine a MIDI file and generate envelopes or drive any animations from it?
Click to expand...

I did use this years ago, http://www.tmproductions.com/programs/midichannel
It's not as advanced as vncnt's, and I've no idea if it still works. But it does/did what you want. (sorry for the hi-jack)

PetGerbil said:
I did use this years ago, http://www.tmproductions.com/programs/midichannel
It's not as advanced as vncnt's, and I've no idea if it still works. But it does/did what you want. (sorry for the hi-jack)
Click to expand...

It looks like it would need 1 plugin per keyboard key.
The Legato MIDI Keyboard plugin will address a maximum of 128 notes -> or 128 keyboard keys, in 128 layers or 128 separate object files.

Interesting subject. I do both LW animation and compose music with my DAW through midi. Music is a sideline for me.

A new version is being prepared - some bug fixes to do (Bezier curve properties) before the next release. 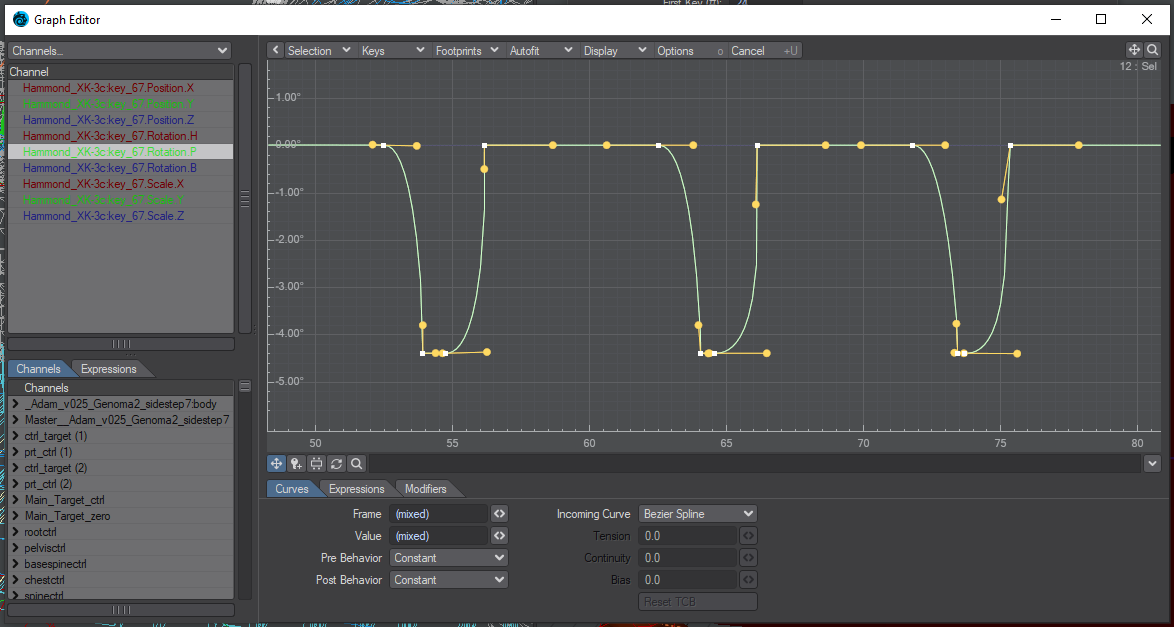