Good morning,
Does anyone know the quickest way to fix this logo letter problem? All the geometry seems to be here, but the poly on the large, front-facing R poly surface seems to be covering up where the hole in the R should be. I have tried several ways to fix this but still can't seem to resolve. Do I need to do a Boolean cut? That seemed to be working but when I go from Open GL and into VPR, it still isn't right. Any suggestions appreciated.

I can sort of solve this with a cut, but I'm not sure this is the optimal way.

go back to modeler and connect the planar faces properly, extrude, that´s it.
Wevé had similar discussion threads about that, will look to see if I can find it.

And this,...though I went to far in fixing it, you can either manually just connect vertices in the right places, or triple it and then merge faces, then extrude it.
Old video so It´s not representing your letter specificly.

How did you create it in the first place?

This may be an obvious question as well, but are you sure you don't have geometry already that can simply be deleted? 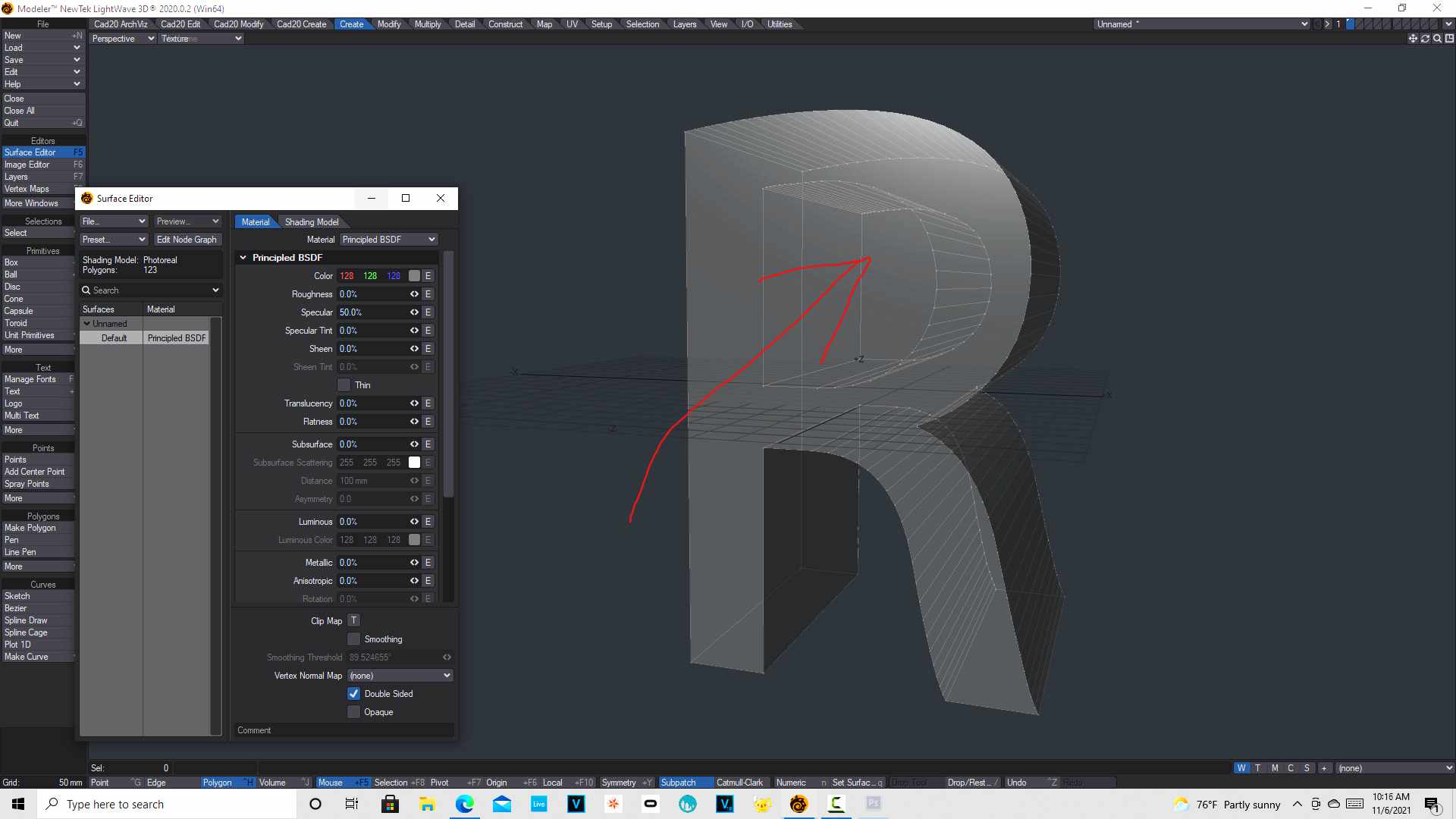 I suspect, and in such case my solution in the vid will not work, that is only for openGL render issues mostly.
When you create your letter, or import from eps, svg..it hasn´t drilled the hole properly, just overlay of paths.
Same with creation of a font letter, there seem to be a hole, but that part is just overlaying the other faces, not connected or drilled.

Like this fira sans 700 font sample, and the only solution (in modeler) is to drill it, preferably by cutting out the hole part and paste in backdrop layer and drill it.
The hole seem to be there, but is just another face, not even connected to the other face geometry so you can´t connect them and thus my vid sample don´t work, It really should have that part autodrilled, but some fonts are like that, and Lightwave not able to cope with it.
If you used Logo Maker instead of text, that could be more trickier. 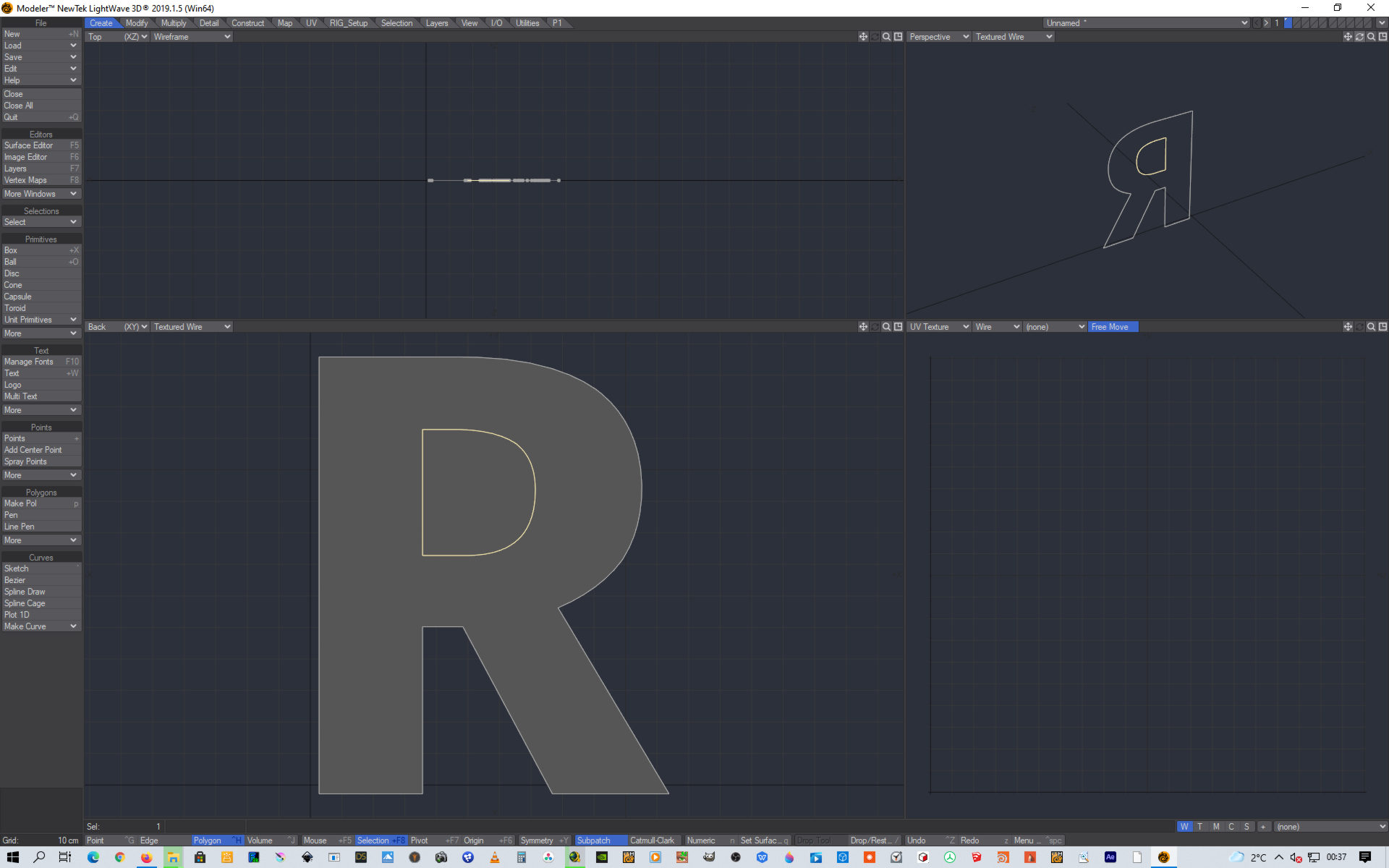 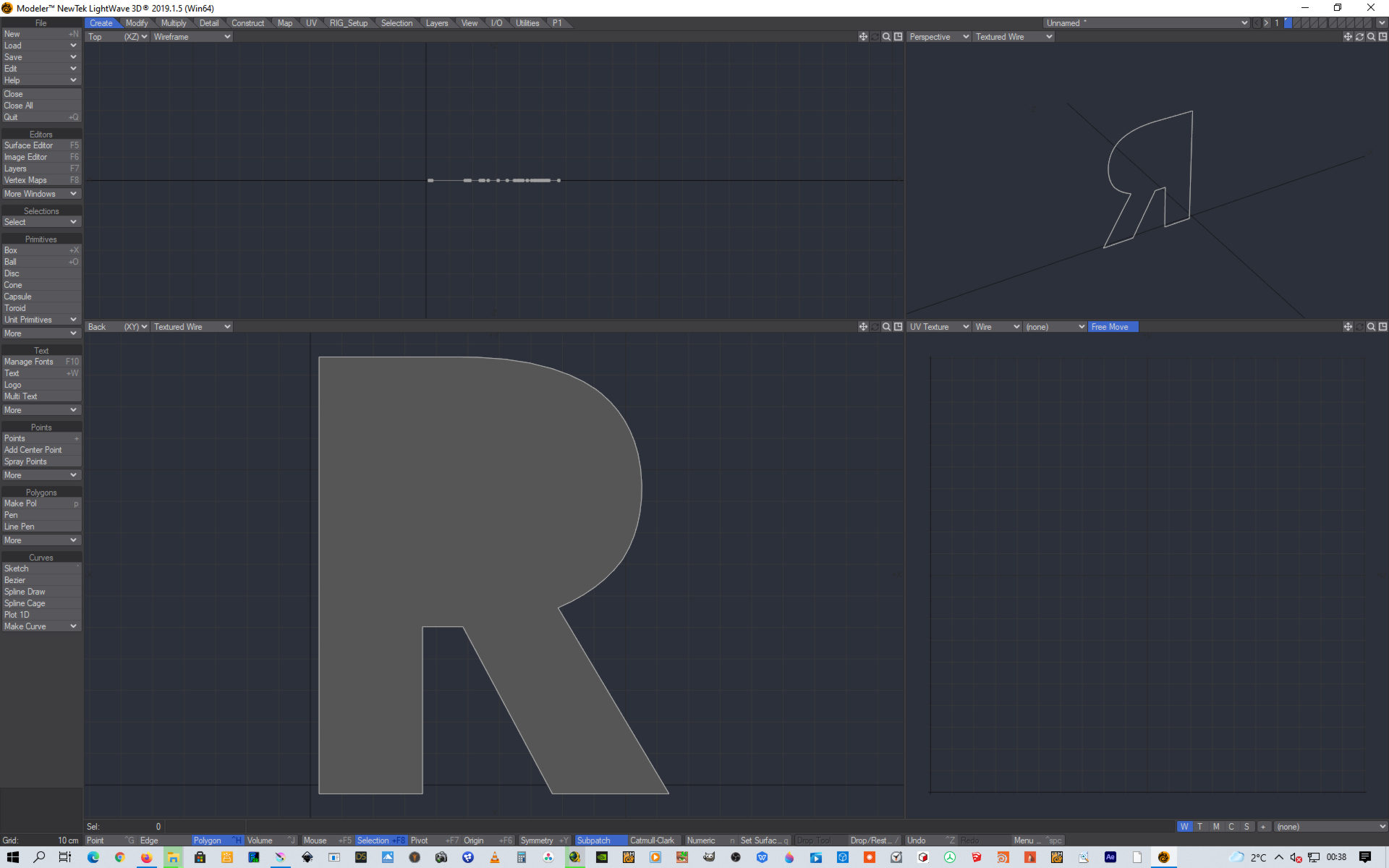 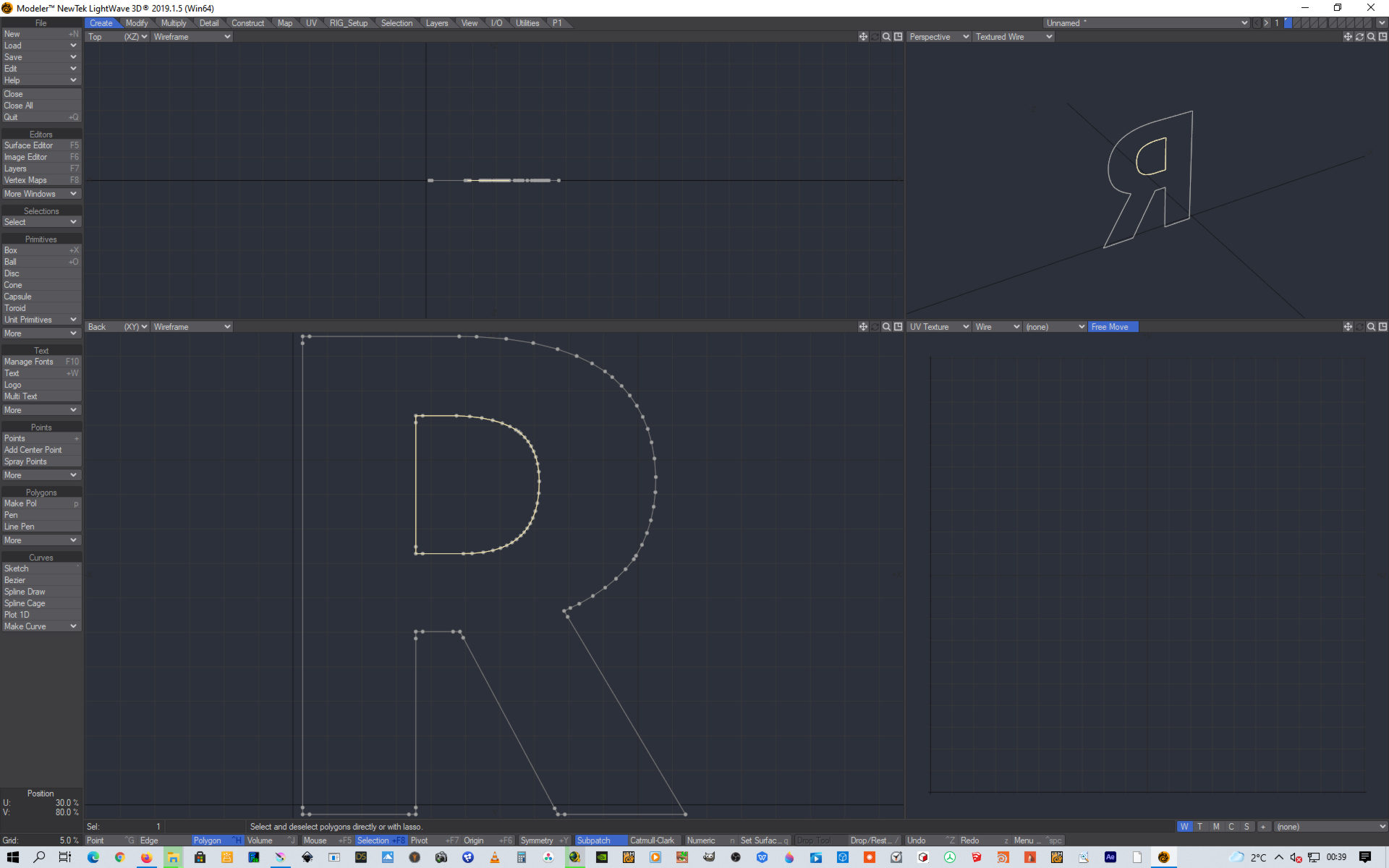 But it depends on how you created it, and as Ma3rk said, it could be a matter of just deleting geometry, but depends on if you used logo maker and how you extruded the piece?
Last edited: Nov 6, 2021

prometheus said:
Wevé had similar discussion threads about that, will look to see if I can find it.
Click to expand...

Ive been having issues with text since I started using LW As you can see there's obvious problems with text I get this issue with prob 80% of fonts, im sure this is an easy fix, but what am i doing wrong? Thanks for any help
forums.newtek.com

The issue is really LightWave text tool. Other DCCs avoid these problems.
I have complained a lot about LW's severely outdated and destructive text tool in the past, so water under the bridge.

Suffice to say, if you need to do a lot of 3d text, switch to an alternative. TrueArt's TrueType Text plugin is also an option, and non-destructive.

Whatever you do, avoid LW's native text tool, in my opinion. It doesn't even do proper kerning.

Will Lightwave 2020 import newer versions of eps files. I am using Affinity Designer, but there is no option to select eps version. I have tried some old eps files I have on my system, and they import fine.
forums.newtek.com

Will Lightwave 2020 import newer versions of eps files. I am using Affinity Designer, but there is no option to select eps version. I have tried some old eps files I have on my system, and they import fine.
forums.newtek.com
Click to expand...

Yes, that is a good one, a bit unstable sometimes depending on what format you export too and shapes etc, generally exporting to PDF works quite well, at least from Inkscape, and you can do your work with proper kerning in there, make sure the holes are drilled properly.

Thank you for these suggestions.

often it is just best to do it in Modeler.

often it is just best to do it in Modeler.

Somewhat true, depends on kerning is proper though, which I haven´t checked thouroghly enough.
You do not gain much otherwise by using Illustrator or inkscape and then import, you may save a little time..such a few seconds maybe not having to fix the holes etc, but then you may also ecounter import issues, or failure when autodrilled perhaps.

Then again, this very font I had for instance (fira Sans 700) you get more trouble than perhaps if it was made in illustrator, since it has no hole and what is supposed to be a hole is just a flat poly overlay...all that described in my image samples above, and you have to cut that part, paste in background layer and the boolean drill it....so a bit messy.

Or choose another font that Lightwave can handle better, but sometimes that may not be an option.

Below however, import from Illustrator fira sans font as well, no issues, to note for proper export...
You have to make the text a path before saving out as eps in illustrator, and also..save to illustrator 8 format.
So that works..holes and cuts are proper, but you have to switch between two programs and also pay for them both, or use blender to create the text and export to Lightwave.

So fixing the holes and such is really not difficult if you know how to in modeler, but sure..annoying compared to other 3D software that doesn´t have this issue with fonts. 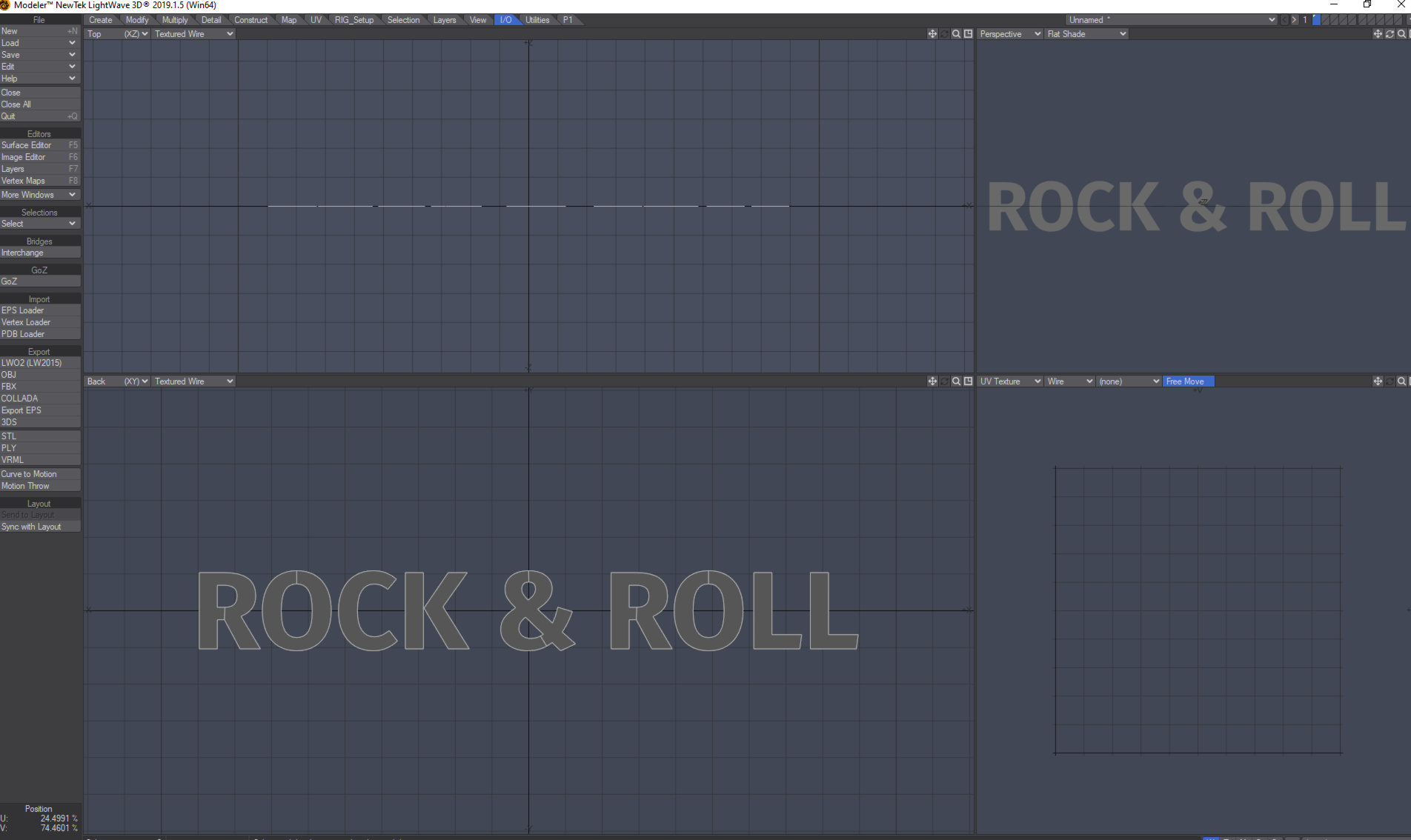 using Illustrator or inkscape and then import
Click to expand...

yup, fixing kerning on a short text is faster in Modeler, and doesn't need back>forth procedure.

i did have a look at other apps for Text, but ultimately wasn't all that impressed.
did really like the C4D text tool. but the cost of C4D is just...

that said, yepzi, some cause more work.

that said, yepzi, some cause more work.

That is Weird, if not Sans 800 is different from fira sans 700 which I used, or did you just get the numbers wrong?
fira Sans 700 is Not okey in Lightwave 2019.1.5, the issue is that it seemingly yields the R okey if looked at in wireframe, but the "holes" aren´t really there ..it´s split in to individual facets overlays, and once removed you do not even have a hole.

This happens with the R,O,D,A letters for instance, and it doesn´t matter if you use text tool or the Logo tool.
Check it with textured wireframe mode.
And..It is the same in Lightwave 2015 for me.
Last edited: Nov 10, 2021

Edit..
I didn´t have fira sans800, so I just downloaded that family from google fonts, different font type(ttf)..and yes, that one works without issues.
That is ttf type, fira sans 700 which I had is otf, can´t recall if that had something to do with it..will try a conversion of it.

Replaced font type with ttf, and fira sans 700 now works without holes, but oddly not all of them was replaced, still some in that family which aren´t working properly with the same issues.
Also ..ttf is older type of fonts, so I have to check I haven´t broken features for Adobe series fonts etc.
Last edited: Nov 10, 2021

And..I suppose You Erik, can´t use the newer types ..since 2015 they added support for more fonts, so those font´s you use are just adapted old ones working more properly?

So it says it does support the newer fonts from the 2015 version and up, but apparently not good enough.

...
ttf fonts are still popular, and usually work.
however otf should work also, no excuse there.