Convert H.264 files to something SE can understand?

I have a video surveillance system that generates H.264 video files. The file extension is simply ".264". SE doesn't seem to be able to make any sense of these. I tried renaming with am MP4 extension. This doesn't help. Does anyone have any experience encoded with H.264?

I tried to run it with my version of Quicktime and it gives me this pretty picture.

Also, my video surveillance system does not have a sophisticated video extraction option. It can only "backup" whole hour long video files. The two I have backed up are 327MB and 309MB. I have nothing else that can generate such files.

What version of Quicktime are you using?
Quicktime 7 is the one you should use.

If you want to send me a file i can always take a look for you and inform you of what you will need to do. Just an option for you.
Or maybe this will help:
http://www.bestshareware.net/howto/how-to-convert-h264-to-avi.htm 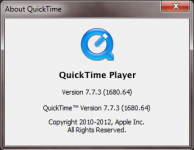 What's the make model number and company web address of your surveillance system?

It might help to get the metadata info of this file using the 'MediaInfo' tool and post that here, then we can see what is really contained inside the file.

There is a lot more information about the system on Amazon:

The company is Swann.

The problem you're having has nothing to do with SpeedEDIT, and everything to do with the file. The SWDVK-825508 doesn't record video in the same way as conventional cameras. The video is processed within the DVR as multi-channel single stream video data. This type of video data requires specialised software to play it back.

This software would be on the included mini-cd and would need to be installed on your computer. Unfortunately the software only allows you to playback the video footage and not export it in another format.

a) Connect a capturing device to the video out ports on the back of the SWDVK-825508 (the two bnc connectors closest to the blue vga output port) and capture the recorded footage by playing the video back from the SWDVK-825508.

b) Use the pc software to playback the backed up footage and capture the footage using something like camtasia.

Other than that, you have no way of using the SWDVK-825508's h.264 video files in any video editor since they use a totally proprietary codec that's tailor made for use on their devices only.

It's not an ideal solution, but it should work.

Thanks Shabazzy. I pulled it off the system so that it won't be over-written. I found a program on the CD called AVIGenerator. I am going to install it and see if this does the trick. The system came with no documentation describing what is on the disk or how it works. I'll let you know how it turns out.
S

I'll be very interested to know what the results are.

I installed the program and it converts the *.264 files one at a time into a *.avi files. I can play the output fine on Windows Media Player. When I load it into SpeedEDIT, though, it really crunches for a couple of minutes and becomes unresponsive. Just about every time I click on something my CPU goes up to 54~57% and the app becomes unresponsive for another minute or two. These are not HD files. When I play them on WMP, they look like they are only 320 X 240. I have tried to play it within SE but I get no motion in the monitor output window. The files are about 300MB. I routinely put HD clips in SE much larger than one of these and they don't put a load on my processor (Phenom II Quad Core) like these things do. So I thought I would shorten the clip and re-render to MPeg-2. When the cursor came back I edited the duration to be only 10 minutes long. After a few minutes the cursor came back and I rendered it out. WMP plays the mpg file but the whole video is of a single frame. There is no motion. At least I am making progress.
Last edited: Apr 29, 2013
S

Yeah, I've heard stories of Avi Generator producing problem files and system crashes. Some users have said the newer versions are better but I couldn't verify that. That's primarily why I would use screen capturing software or just hook up the dvr to a capture device because it allows for a lot more flexibility.

But if you really had to convert the .264 files you could try:

or have a look in their driver file site at:

Im no SE user (FCP) but that sounds like you dont have your project set up to match your imported files. Maybe thats not an issue with SE but i know FCP will act the same way if i haven't matched my Sequence to the source files.
Glad your making some progress though, always a good idea to check out the CD that comes with any hardware

That shouldn't be an issue. SpeedEdit was built to be "format agnostic" so you can mix and match source formats within the timeline.

Shabazzy said:
But if you really had to convert the .264 files you could try: http://swann.com/downloads/drivers/DVR_2600/AVIGenerator-V1.8.0.0.exe

or have a look in their driver file site at: http://swann.com/downloads/drivers/

That first program, at least by name, is the very one I used. I'll check into the other.

I did something that is similar to what Shabbazy suggested that was a success. I have this piece of software called CamStudio that records a rectangle of video right off the screen. It is free. If I preset the size of the record window to the video size it makes it easier to manage. I played the videos with Windows Media Player that I created using AVIGenerator and recorded them with CamStudio. This produced two *.wmv files that SE understands. I used SE to create a spoof on a friend of mine that visited my house during working hours. You can view it here: http://www.youtube.com/watch?v=2jXbAa4uikY
Last edited: May 10, 2013
S

I hope you're friend's got a sense of humour (or I guess his .38 will let you know).

In any case, I'm glad you found a solution that worked.