Can I use nodes to effectively redden light that hits at a shallow angle?

Looking to upgrade my Earth model further, and one thing I'd like to do would be to redden the lighting along the globe where night meets day, to emulate the reddening of sunrise / sunsets.

Or to put it another way, can I control the colour of light depending on the incidence angle with the surface it hits? Or some equivalent effect?

I'm not a node expert but I'm sure it can be done. In the regular shading method just add a red tint to your surface on a light incidence gradient.

There's a node that can tint a shader / surface?
S

There's a node that can tint a shader / surface?
Click to expand...

That sounds tricky to calculate - and very difficult to blend in...

I was hoping for something more direct, like linking the light colour to the angle of incidence where it hits the surface...
S

Shaders > Relfections > Reflection node does what I said when you click Tint button and pick up color.

Use normal color, and then tinted like above, as sources to Mixer Bg/Fg Color, Incidence node plug to Opacity in Mixer.

I did some experimenting and posted a video about it. I'm not sure it's quite what you're looking for, but it might help.

The basic technique I tried was similar to the initial solution on your thread about mixing the light/dark maps (although I didn't see that thread before making the video) where I run a lambert shader into a gradient to make a red band at the edge of the shadow. I also tried just shifting the hue with the color tool.

The color tool method might work if, instead of using the gradient to only shift the hue on the edge of the shadow, you make the whole image shift to red and use the gradient to blend the color shifted image back onto the original with a mixer node. I almost got there in the video.

[edit]
Nope. The color tool-hue-shift is a dead end because it turns the green stuff blue as well as the blue stuff red.... duh. Oh well. Maybe use a gradient to tint the output of the color map to red only and blend that in. (color to gradient input. Gradient would be black or dark red to red-orange.) then blend that back onto the main color flow with the gradient band as the mask (opacity input on a mixer node).

[edit edit]
Okay, I think Sensei is right about multiplying the color. It looks better than screen or additive, although I don't know if it reads as atmosphere per se.

I started wondering whether I understood your problem correctly. 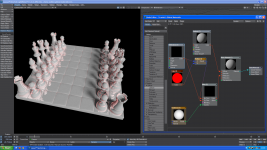 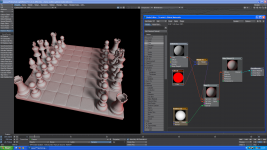