Owners of TriCaster Mini Control Surfaces may notice the vertical edges around the keys, T-bar, and screws are brown in color as shown in the included pictures. This brown color is a normal byproduct of the laser-based process used to manufacture these components and appears exclusively on the vertical, non-viewable surfaces during standard operation. However, excess brown color is also deposited on the protective cling film that covers this polycarbonate surface and often the discoloration of this disposable film extends to slightly obscure the horizontal, viewable surface of the device. In the photos provided the additional discoloration evident on the film can be seen quite clearly. 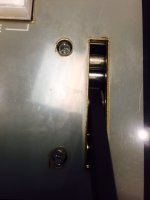 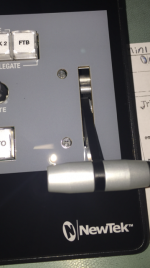 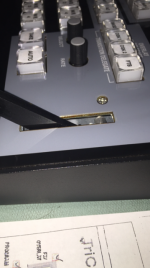 STEPS TO FIX/WORK Around
Removing the plastic film from the control surface will resolve the issue. Brown coloration on the top of the control surface should no longer be visible. Edges inside the T-bar and other vertical, non-viewable edges will still have some brown color. This is considered the standard coloration of the equipment.
NOTES: Cosmetic / packaging issue only; will not affect the equipment performance
Key Words:
Browning, Brown, Burned, Burnt, Rust, Control Surface, Mini
Last edited: Oct 2, 2015
You must log in or register to reply here.
Share:
Facebook Twitter Reddit Pinterest Tumblr WhatsApp Email Share Link
Top Bottom