I did some tests on a very specific problem. Here are the results and the method (maybe someone could use that, too):

Since you have to do the fractureing already in Modeler and not on the fly in Layout, there is a problem when rendering materials like porcelain, which absolutely need sub surface scattering. You can see the fracture lines shining through. 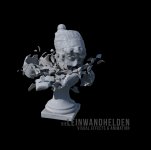 Before breaking, you can simply exchange the object for a whole object. But with the first fracture, the fracture lines appear on the entire object. This ruins the effect of larger pieces breaking into smaller ones. 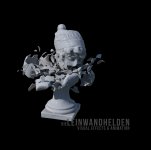 To avoid this I chose the following method, which works for this task, even if there are some inconsistencies (maybe for me only).

For the material of the edge I used a clip map which is controlled by a gradiant. This has as input the length output of the Ray Trace Node. The idea behind this is: for each point, it is looked at how far away the nearest geometry is and thus determined whether the edge is visible to the camera or is still hidden in the object. If it is still hidden in the object it will be clipped by the clip map and it cannot cause shadows in the sub surface scattering of the porcelain. I hope that makes sense. 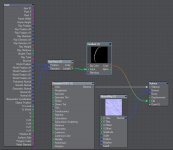 Perhaps one of the node experts knows a better method or improvments.

The Gif do not show the material correct, look at the pictures above.

A few more things about the porcelain material: To have a little dirt in the depressions, I use the "Patina" node. I use it to control color and roughness. To save render times I have rendered the “dirt texture” (Dirt output of the Patina node) as an image with the surface baking camera and used it instead to control color and roughness.
The rest is a simple Principled BSDF material with little roughness and lots of sub surface scattering.

I'm not absolutely sure on this, but wouldn't ChronoSculp solve the cracks on the larger pieces issue?

no, you'd still have the cracks issue.
good solution by Thomas tho'

I always just cheat the switch from unfractured to fractured renders in comp with an animated mask. Works fine and I'm able to move on to the next thing in a few minutes.
S

Greenlaw said:
I always just cheat the switch from unfractured to fractured renders in comp with an animated mask. Works fine and I'm able to move on to the next thing in a few minutes.
Click to expand...

I think that's one of the most valuable lessons I've learned as an animator. There's no right or wrong way to solve a problem, it's whichever method(s) works that's important.

In the early days of my attempts to become an animator, I used to focus on solving a problem using a certain technique just because I believed that was the way the pros did it. It had to be sophisticated and clever. Then I started working in the industry and realised some of the methods I thought were correct were just too convoluted and complex to ever be practical in a studio environment. That the workarounds that some of the pros used, to get the job done, were so simple and quick that it really woke me up to how things work in the real world of production, and how they placed more importance on the time it takes to complete a project rather than how it's completed.

That was a wake up call, I can tell you. And I never looked back.

I always just cheat the switch from unfractured to fractured renders in comp with an animated mask. Works fine and I'm able to move on to the next thing in a few minutes.
Click to expand...

yup, at times it can interfere with Motion Blur, but usually an alright method.

Greenlaw said:
I always just cheat the switch from unfractured to fractured renders in comp with an animated mask. Works fine and I'm able to move on to the next thing in a few minutes.
Click to expand...

Yes, this is the fastest method if you can replace the whole object. If you want larger parts to have no cracks before they break into even smaller pieces during the simulation, then unfortunately this technique no longer works.

You can see it well in the images. The parts still appear whole although the simulation is already running.

This is a special case because the inner edges of the fragments cast shadows because of sub surface scattering. You don’t see that with solid materials anyway.

Yes, that's what I mean by animating the mask...it can expand and change shape to reveal the cracks as they grow. A soft edge helps. This technique has its limits of course but I've used it effectively even in very slow (i.e., large scale) fracture simulations.

That said, I don't mean to dismiss what you've done here. It's very cool, and in some situations, doing it the proper way is absolutely necessary. Thanks for sharing your nodal setup!

erikals said:
posted the info at Youtube
go some feedback from Bryphi and Mike Green
youtube.com/watch?v=QJHuAma3faw
haven't looked into Mike's trick yet.

Thank you.
I've known Bryphis Videos about this topic since it came out over 3 years ago. Denis showed a similar method in this thread. And I too have done similar tests (though never needed in practice).

However, these are methods of correcting smoothing errors in rendering of fractured objects (If the normals are not smooth and clean because of fracturing).

My method shows a way to avoid the shadows of the fracture edges in the subsurface scattering of the porcelain material (The dark break lines you see in the material are the shadows of the break edges). In this object, the normals are smooth and clean.

But the methods to correct smoothing errors of fractured objects we should perhaps also take a closer look at.


By the way, Lightwave 2020 renderer renders the breaklines really nicely, if you want them.

Thomas Leitner said:
By the way, Lightwave 2020 renderer renders the breaklines really nicely, if you want them.
Click to expand...

Is that because of the Random Walk SSS?

Another awesome post Thomas, thanks for taking the time to show us so much cool stuff

lardbros said:
Is that because of the Random Walk SSS?
Click to expand...

The LW 2019 material is not adjusted specifically and could perhaps be optimized a bit. In addition, such a thing is of course always a matter of taste.


Interesting detail: although the random walk SSS method is considered slower, the LW 2020 rendering was 9.6% faster (In a comparative rendering without particle system).