Basic stuff Lightwave users should know, but are not-so-obvious

gar26lw said:
A long time ago Sensei knocked up a plugin for me to weld points and auto delete 2 point polys.

I use it all the time instead of normal weld; could not live with out it!

I'll put i here. To the best of my knowledge, it doesnt exist any place but my HD.

something the weld tool should do automatically via the lw modelling options, as a user choice.

@ sensei - please say and I'll remove if this is not wanted here.
Click to expand...

djwaterman said:
Oh boy, the things Hidden away, hardly surprising with three different scene editors to choose from we don't know much about any of them. Thanks for the terrific tip.
Click to expand...

I rather wish one could just click and type in the Intensity field*, but that doesn't appear to be an option. At first I found adjusting via mouse very clumsy and imprecise, but adapted reasonably fast. Still, a universal "mouse sensitivity key" convention would be very welcome-- one key making the mouse very 'slow', another to make it....well, it's already FAST enough. Maybe EVEN SLOWER.

.
*as one could reasonably expect to do.

I suggested this some time ago. Got no traction. I have my mouse speed set in a middle ground, but often need to achieve a precise movement in order to accurately place something in LW. Having a /10 speed modifier key would be a seriously Good Thing.

Hey Guys, There was a guy in the forum asking about if there was a way to toggle back and forth the display polygons selections in modeler. (Shortcut button, Lscript etc.) I know you can do this in the display panel but you would have to keep doing that which would be a real pain, (Make selection, open display, turn it off, bevel polygons, go back into display panel turn it back on... You can see how this would be time consuming. I've ran into this quite a few times wanting to be able to turn off certain things because they get in the way while your work but you need them at the same time.


TIP: I've come up with a neat little work around. It's not ideal but it works. Set two viewports as perspective, Make sure both viewports don't have independent rotation checked on. (This will allow you to rotate around your model in both viewports) Now turn on independent visibility for one of the viewports and turn off what you don't want on for example, polygon selection, normals, edges, grid, origin etc. Now you can work without having certain displays in your way. 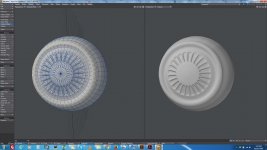 Jason, add the pic from FB you made to make it clearer what a huge win this is.

Kids, the big takeaway here is when you turn off INDEPENDANT ROTATION, all the Perspective vuports are locked together- I had no idea. It is great. Huge kudos to Jason for figuring this one out!

jeric_synergy said:
Jason, add the pic from FB you made to make it clearer what a huge win this is.

Kids, the big takeaway here is when you turn off INDEPENDANT ROTATION, all the Perspective vuports are locked together- I had no idea. It is great. Huge kudos to Jason for figuring this one out!
Click to expand...

Thanks man, I just added the pic. I was working in this setup and it's great!! I love being able to see clearly what's happening to the model.

what would be good now is a 6 way split for multi monitor and leave this up all the time, I run into areas where I could use this quite often, Thanks!
J

Accumulating value over time, or "ratcheting" a value based on item's movement

RATCHETING ANIMATION, or accumulating a value between two different items in an animation is a challenging task.

Forum user Prince_Charming demonstrates an innovative technique in this thread:

http://forums.newtek.com/showthread.php?151518-Ratcheting-animation​
(Posting the thread rather than the tute as the tute is unlisted and I'm respecting the poster's wishes. Please do the same.)
A

Just saw this plugin (ef ItemFocus) on this page:

With this you can easily isolate the object or objects you want for vpr preview.

I'm sure all of you already know but this was new for me. This should be a must on LWNEXT.

yep, quite nice, close to this one...

i think Mike Green (Dodgy) has a plugin that does these things +more (?)
https://www.youtube.com/watch?v=c8fdaCgzXbk
A

i think Mike Green (Dodgy) has a plugin that does these things +more (?)
https://www.youtube.com/watch?v=c8fdaCgzXbk
Click to expand...

This seems a layer control more than isolation plugin, but yes, layers on layout can be a good thing also.

You can also select the objects you want to render and use F11, and it will only render the selected objects.

With this you can easily isolate the object or objects you want for vpr preview.

I'm sure all of you already know but this was new for me. This should be a must on LWNEXT.

Thanks. I didn't know about this one. Really handy!

Snosrap said:
Thanks. I didn't know about this one. Really handy!
Click to expand...

Y'all are well served by perusing all the "ev_" plugins.
B

Too much goodies! Can't remember all
A

Just discovered Add Edges! Great to add an edge to a fixed distance from the border.

Asticles said:
Just discovered Add Edges! Great to add an edge to a fixed distance from the border.

Remember release the edge with RMB.
Click to expand...

jeric_synergy said:
Double checked, still not here, 2015.2 Trial. Is there anything else that needs to be turned on?

This post was regarding the experimental feature of showing rotation angle outside the rotation gizmo axis when rotating an item. This only applies when you are rotating in Parent coordinate space (not local or world). That's probably why some were seeing it and some not...
Last edited: Mar 9, 2017

jeric_synergy said:
(Axis Translate, Selection Center snap) ... center of all the visible 'parts' in the background layer, but I suspect it is. The 'Selected' is throwing me. (BeeVee?)
Click to expand...