50 CDs/DVDs of training material - mostly Lightwave and some other, going FREE

In a bid to downsize physically, I'm getting rid of some stuff (you probably figured). Amongst that are 50 disc titles, mostly for Lightwave, some older ZBrush stuff, and some other creative skill titles from Gnomon Workshop.

Basically if they don't have a new home, they're going to the tip/landfill, so I'd prefer they be of use to someone.
You can have them for FREE - but please just cover the shipping costs from my location in UK to you (I'll get pricing based upon your address).

Ideally they go all together to one new home.

Group Photos attached of all the titles. 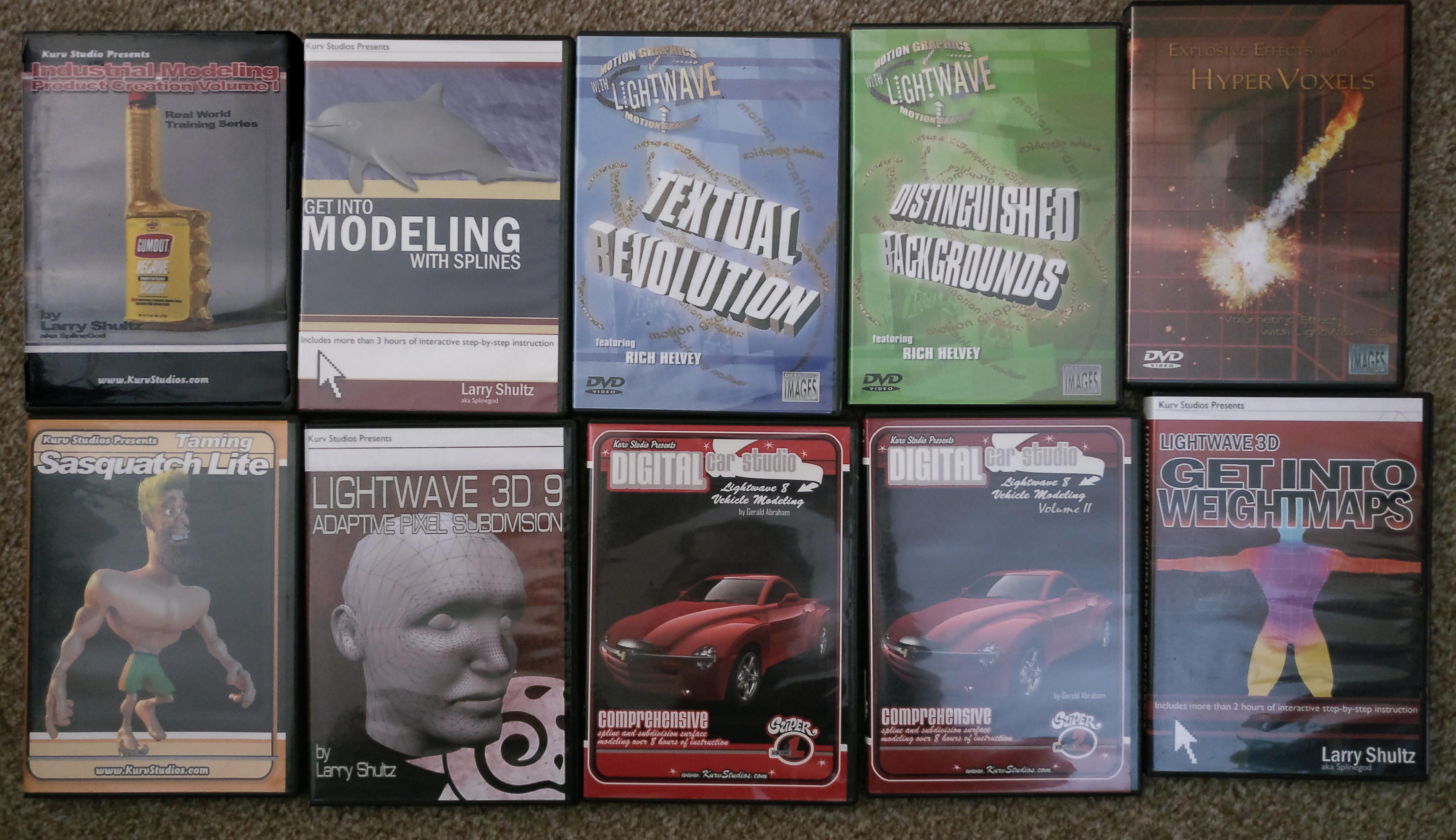 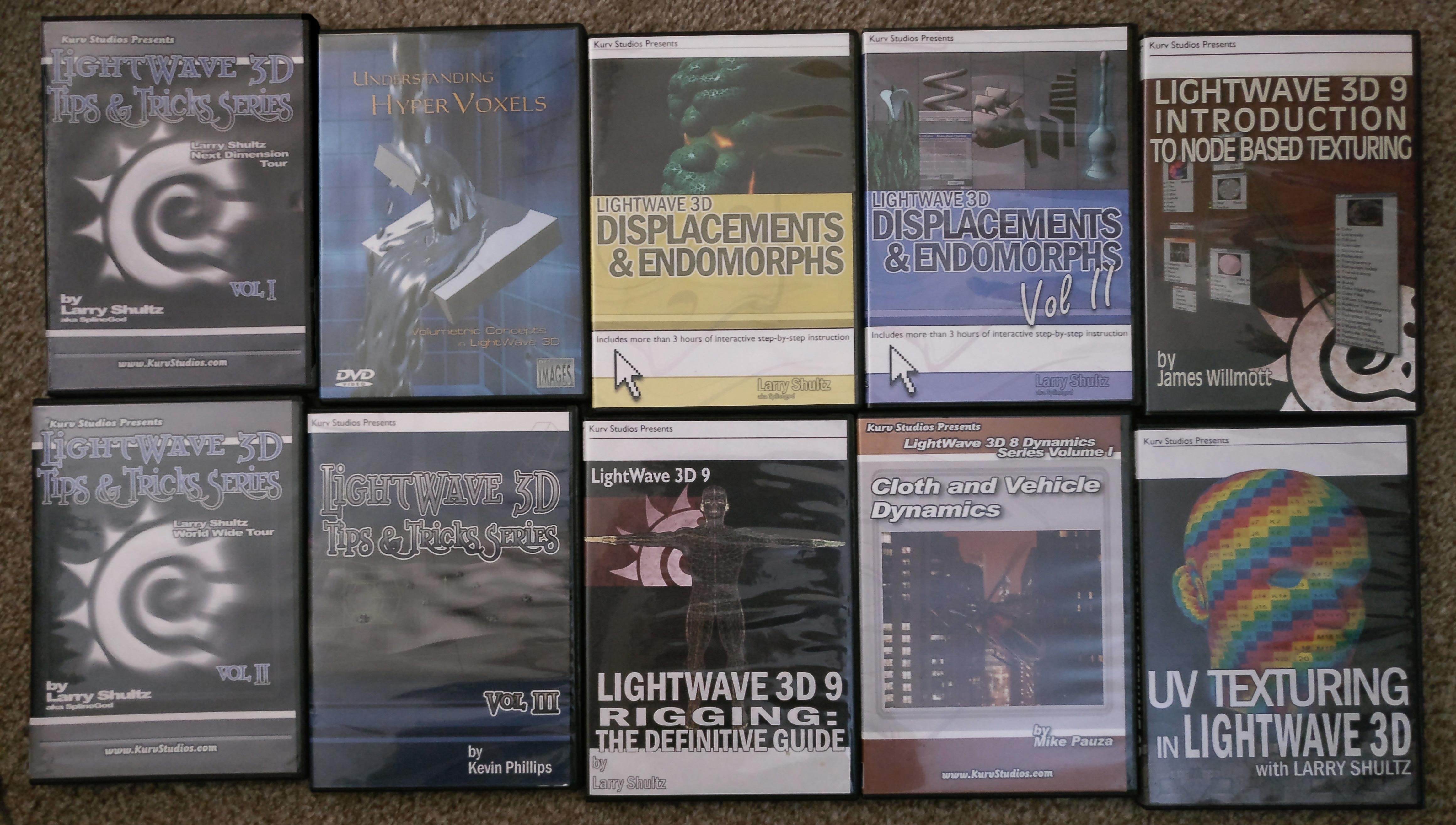 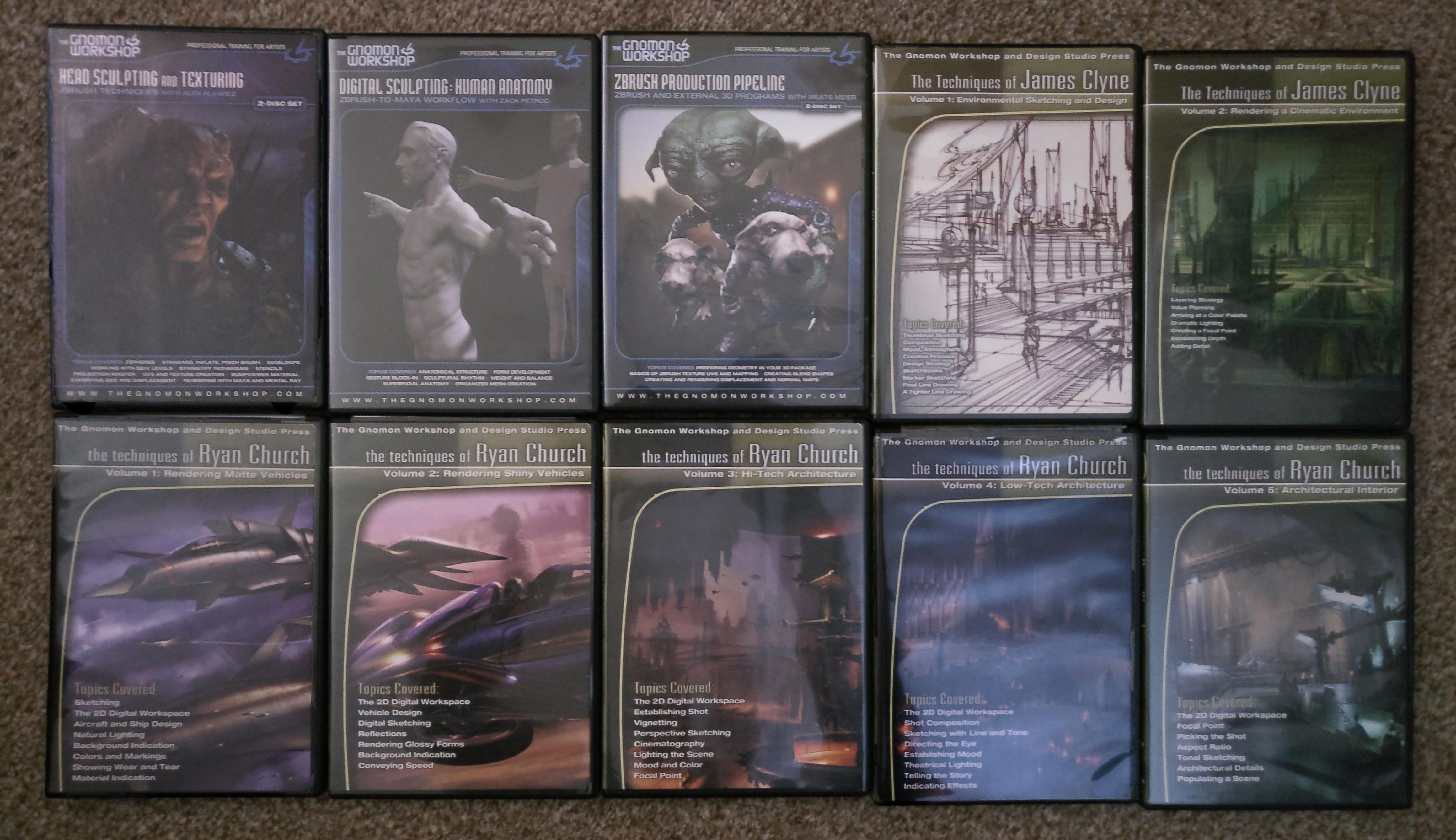 Lexx is much closer, and probably has "nicer fields where they can play", so I'll gladly withdraw my request (sent by msg a few hours ago) if it means they go to Lexx instead.
T

Jwiede, you are too kind, but I wouldn't dream of jumping queue over you. I had a chunk of those titles anyway and only asked for all of them because Dommo preferred a bulk shipping.. FWIW, the Tim Dunn, Kevin Phillips and Set Extensions titles were of most interest, but I have so much learning to get through anyway..
For me, the "holy grail" is the Kurv Advanced Cartoon Series by Jesse Toves, which no human being on this Earth seems to have.
Last edited: Jul 18, 2021

Gents, if you'd like to 'divvy up' between you, that's fine.
I just didn't want to have to post out 1-2 titles to all sorts of different addresses all over the world.

Lexx, I notice you're in Oxford, UK, so quite simple. Just message me directly with your address to check on postage/shipping options. I tend to prefer to use overnight couriers within UK, so I will actually need your email address and phone number when the time comes, to complete the bookings.

So if you both chat privately about if one of you takes all or how you want to split these up, then let me know
S

I'll take a piece of that action.

I'd be interested in having:
If any of the above are of no interest to you guys then, I'd be happy to take them.

PM me if there are any that I can have.

This is a very generous offer by the OP.
I have a lot of those, and they are very good, especially the legend Larry Shultz.

Ok, so I have 3 interested parties.
That's enough people to split between

I have TheLexx's ideal wishlist, if not everything.
Jwiede, you were first to respond so get first shout really. You'd happily take all. I've let you know privately TheLexx's minimum. Let me know what you'd like most for sure and I'll compare it to Shabzzy's list.
Shabazzy, happy to send you some titles, but can't guarantee you'll get everything you want due to these first two fine gents responding previously.
S

The Dommo said:
Ok, so I have 3 interested parties.
That's enough people to split between

I have TheLexx's ideal wishlist, if not everything.
Jwiede, you were first to respond so get first shout really. You'd happily take all. I've let you know privately TheLexx's minimum. Let me know what you'd like most for sure and I'll compare it to Shabzzy's list.
Shabazzy, happy to send you some titles, but can't guarantee you'll get everything you want due to these first two fine gents responding previously.
Click to expand...

So long as they don't end up in the dump and find a good home (preferably mine ), I'm happy.
M

Are the Character Modeling and Animation Series DVD's reserved for anyone?

@mcansler I messaged you directly. I think..!

Ok, the final divide up, based upon requests / order of requests, and what was left, is as follows:

Bear with me while I source suitable boxes etc and I'll be in touch with you for your addresses (if I don't already have them) and to inform you of the shipping costs.

I hope you're not leaving the LW community, and just clearing space.
One thing I love about the LightWave community... exactly this, the users are so cool.
S

Awesome. I'm looking forward to hearing from you sir.

I hope you're not leaving the LW community, and just clearing space.
One thing I love about the LightWave community... exactly this, the users are so cool.
Click to expand...

Well, in theory, no....
I don't frequent the forums much these days simply because most discussions revolve around the future (or not) of LW and then Blender stuff. I used to post in threads where I felt I was adding value but typically I didn't receive much or any acknowledgement, so I figured I wasn't helping people much, so stopped putting energy into it.

I have virtually met some cool people here though and connected more directly with some on Skype etc years back, so I have LW users I share projects with either in part or full, which has been great.

But since LW appears to be abandonware currently, and since Brexit reactions took my business revenue down to 25% of what it usually was (then it finally began to pick up in early 2019, then Covid pandemic hit), plus given that with these things, I was getting about one 3D project per year, I'm not investing further into LW any longer (so I won't upgrade to v2020 - I just missed out on getting free upgrade after buying v2019 quite late). A recent project had requirements that forced me to step into Blender for the first time ever. Quite a shift. Some good things there, some not so good. Some tasks are way easier there. Some stuff is way faster and easier in LW (especially with regard to using Octane). So I don't intend to drop LW, but just use it when needed. If development ever starts again and is good, and appears it would have a return-on-investment, and if 3D work still keeps coming in, I will consider upgrading in future.

Having had a very dry spell for 3D in the last few years, suddenly I'm having a little influx with project after project.

Meanwhile, with what Brexit put me through (and so, my wife too) and then covid, I did a lot of re-evaluation of where I am at now, what I want to do and how I wish to serve others. Honestly, even though I've been in 3D world (university) since 1998, aftre pursuing it hard since Jurassic Park in 1993 and Toy Story in 1995, when there was barely a university in UK that actually taught 3D, I kinda came to a conclusion in 2018 that 3D may become more of a hobby for me, if/when i get time. Ah, time. That thing there is never enough of.

For business, I am getting a lot of pleasure from providing systems, websites, web apps, and more for automation and systemisation so that a solopreneur or small business can achieve more for less running cost, punch above their weight more. With the little team I've put together, we can solve some quite challenging tasks and I'm building up my own SaaS tools within that too. Trying out and implementing the use of new AI-powered tools for this purpose is also very exciting! I've become very aware of mindset now and have also been taking steps toward becoming a business/executive coach. There's a lot of reward in just helping people grow and help them get unstuck, move forward in business.

I've also slowly been building up a webhosting arm over the years, and am shortly going to rebrand that and push that a lot harder - would like to grow it 3-4x because it's so automated that it's pretty much just passive income. On top of that, working smarter, I've put together some deals where aside from getting paid to build a couple of websites, I get a revenue share of the ecommerce too - and since I'll also be paid to help with their SEO and marketing, success I bring pays back in the longer term too - more passive income. I'm getting too old for the all-nighters of the creative world, and if anything, from what current research says, I'm doing a good job to set myself up for Alzheimers that way, given that I have that on both sides of the family!

But aside from all that, the downsizing is due to house moves, and finally dealing with rearranging storage - aka realising there is less space - and what I 'really' need to keep.

So no, I'm not 'leaving' Lightwave, but life is making it a lesser of a priority.
No matter what though, even if I did officially bow out, any time in future that I open LW or other 3D app, I still to this day, and suspect always in future, get a warm fuzzy feeling whenever I orbit a model in wireframe view

After all those years, being in a 3D (or related) business, I'm sure there are more stories like this.
Stay in touch.

Man you built up quite the collection. I think I bought one book and zero DVD's over the last 20 years of using LW.

Haha! Well LW was kinda alient to me when I first touched it it in 2006 (I had been on other tools prior to that) and so I wanted to get m head around it faster.