1001 ways to use LW and Blender together

Rayek said:
Each object can be its own subcollection if you want to use asset linking and still transform/animate these individually in the master scene.
Click to expand...

That might make creating an Asset Library blend file quite cumbersome. Currently, I have all of my medical objects (like proteins) added to a collection.

Are you saying that I can't just pick one of those out to link to my new scene? I have to move each model into its own collection?

I have tried linking an object from a blend file where the object is the only one in the collection. That still comes in as a locked instance.
Last edited: Jun 30, 2022

Okay, I just learned something important!!

If I bring in a Linked file, it comes in as a locked instance. If you right-click on it in the outliner and select ID Data > Make Library Override Single, now you can transform and work with the model as you normally would.

And, when you save your current blend file, it will not increase its file size. If you use the Edit Linked Library button as Rayek has pointed out, then you can modify the original if need be and it will propagate through all the other blend files that it is used in - just like Lightwave.

This feels more like a Lightwave workflow for me.


Edit - Although, for some reason, Edit Linked Library doesn't seem to work with the file set up as my Asset Browser.
Last edited: Jun 30, 2022

Erikals asked me about wether or not it was possible to save out Lightwave´s volumetric items with it´s fractals in to blender, but it´s not possible since it´s not based on VDB.
I just recently discovered the volume cube node in blenders Geometry nodes, and it is kind of easier to setup for clouds in blender than just working with a principled volume material in blender, it is a bit different since it has some form of voxel grid and you have to take the resolution in consideration, but it seems to work better with the actual texture in that type of volumetric container so to speak.

Now, this actually allows for exporting out as VDB to lightwave, or back to blender if you want that.
I first tried by simply saving to usd which should save any vdb in to a volume folder with the vdb file, but I was just gambling and did so with what I started with, which was just a basic cube I then went in to geometry nodes and swapped to a volume cube, but that doesn´t work since the outliner has no VDB container present.
So I then added an empty volume, that by itself has no geometry nodes, but there´s a modifier for that which I added, then retargeted it to the already setup geometry nodes.
So once that was done and exported, the volume VDB file is there in the volume folder, and it exports well in to Lightwave ( see images) though I was just testing so more resolution is needed and some more tweaks.

But there you go, we can export blender cloud fractals in to Lightwave that are there in a volume item so to speaK, but unfortunately not the other way around..which is what I want.
The technology is there for Lightwave developers to look at and see if something similar could be made for lightwave.

A side note I mentioned else where is that you can also convert the fractals in blender to a mesh.
The volume cube also offers realtime openGL feedback, That is not possible with Lightwave´s volume item, may slow down a bit depending on resolution though.


Realtime openGL of the volume cube, to note is that we have the volume cube which just controls the density of the volume, fractal type, resolution and overall scaling of the cube, a set material node has to be inserted between teh volume cube and the output, and it´s material with emission, density, anisotrophy is handled as usual with principled nodes in node shader instead...

eevee engine, almost realtime but slower than opengl, you need to set very high samples for the volumetrics, so it is that together with the actual volume cubes resolution that may slow the system down... 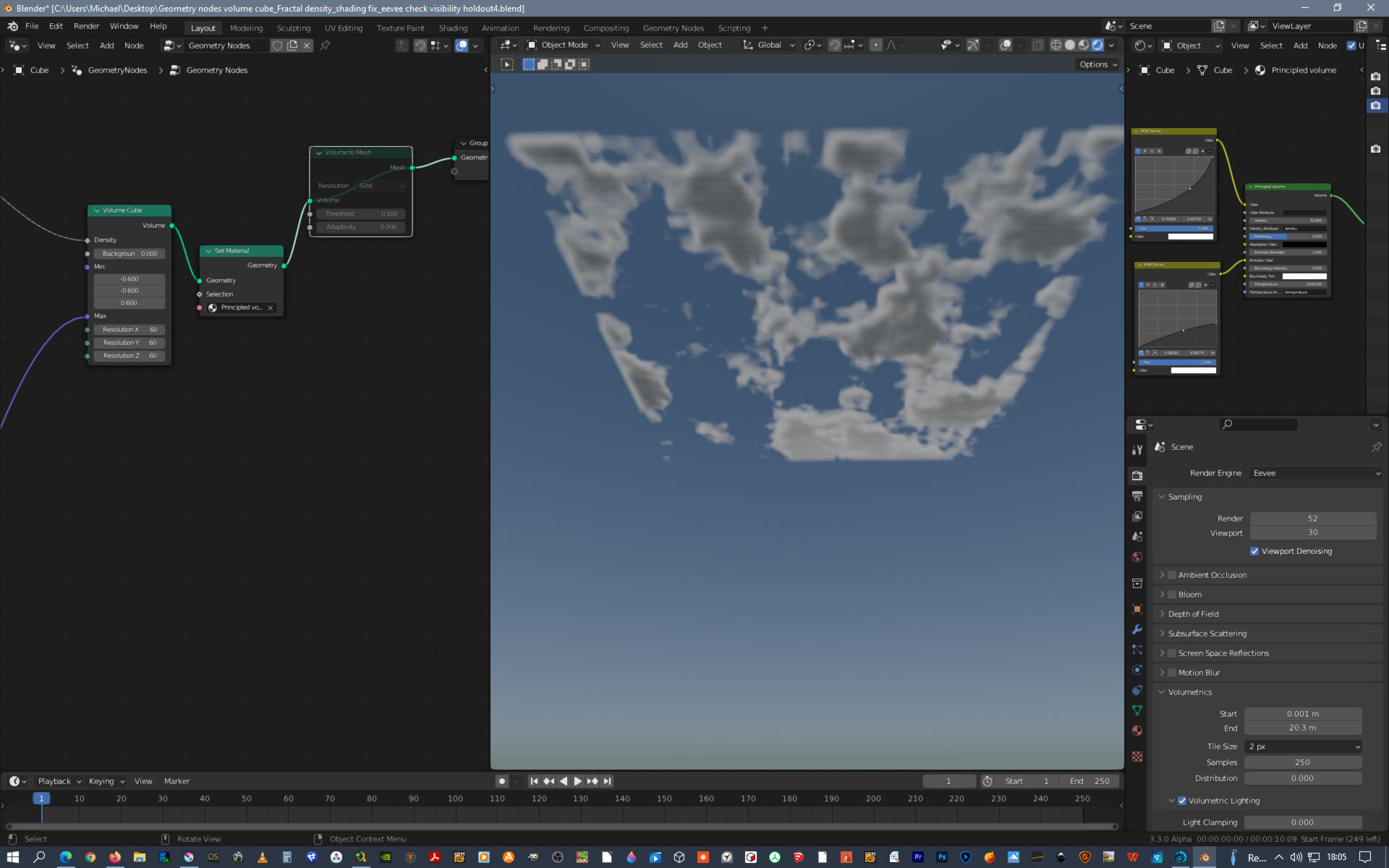 And the cool volume to mesh node in geometry nodes (it´s also there as a modifier in the modifier list), so th clouf fractals are now a true polygon mesh.... 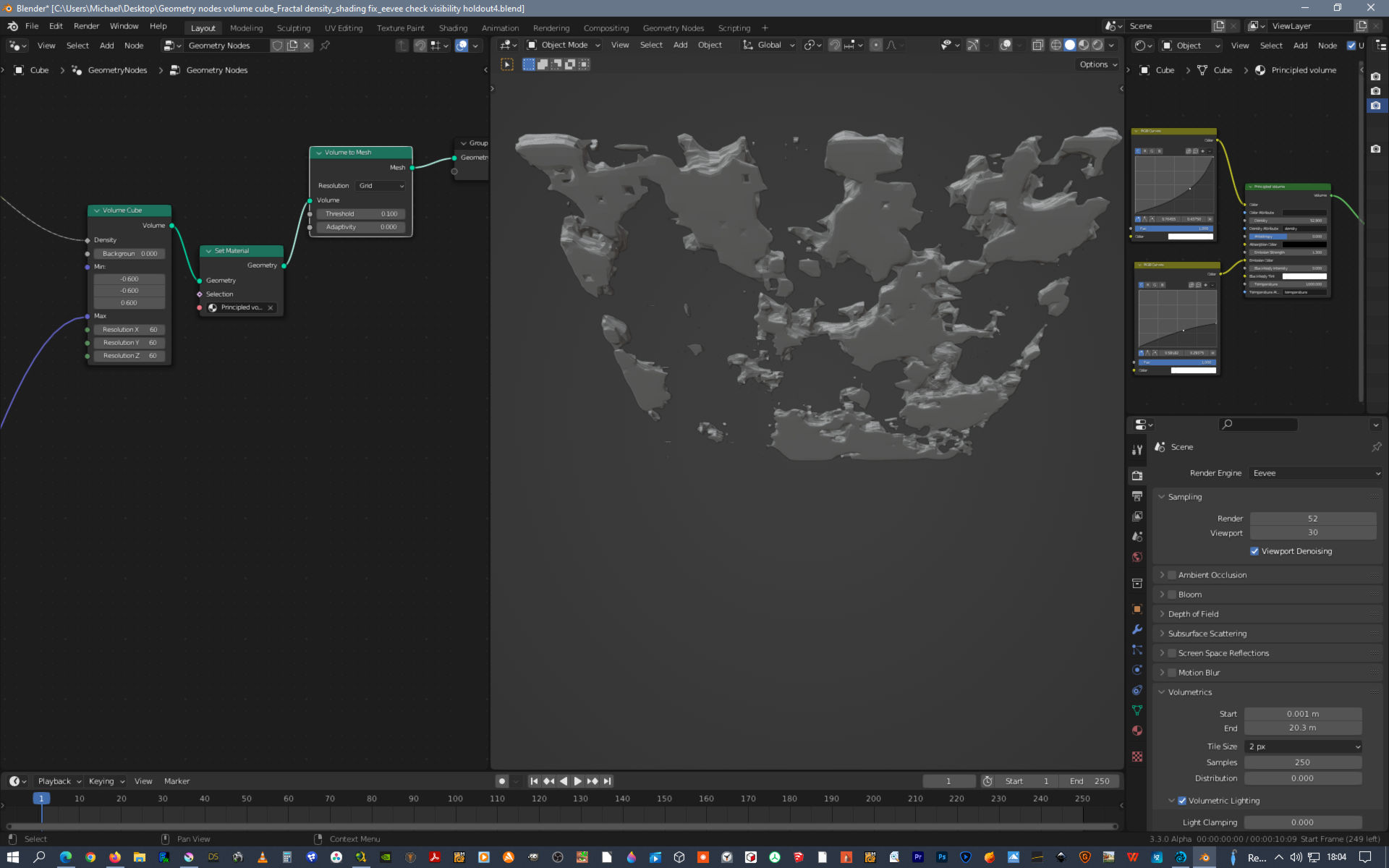 And added an empty volume to the blender scene, and a geometry node modifier and targeted this geometry setup I had made, then export by USD in blender alpha 3.3 ..this saves any vdb file out to a volume folder, for a possibility to import to Lightwave, too rough in quality, but it was just first testing if it works or not, sadly we don´t have the tech to do it the other way around which I would have been even more appreciative about... 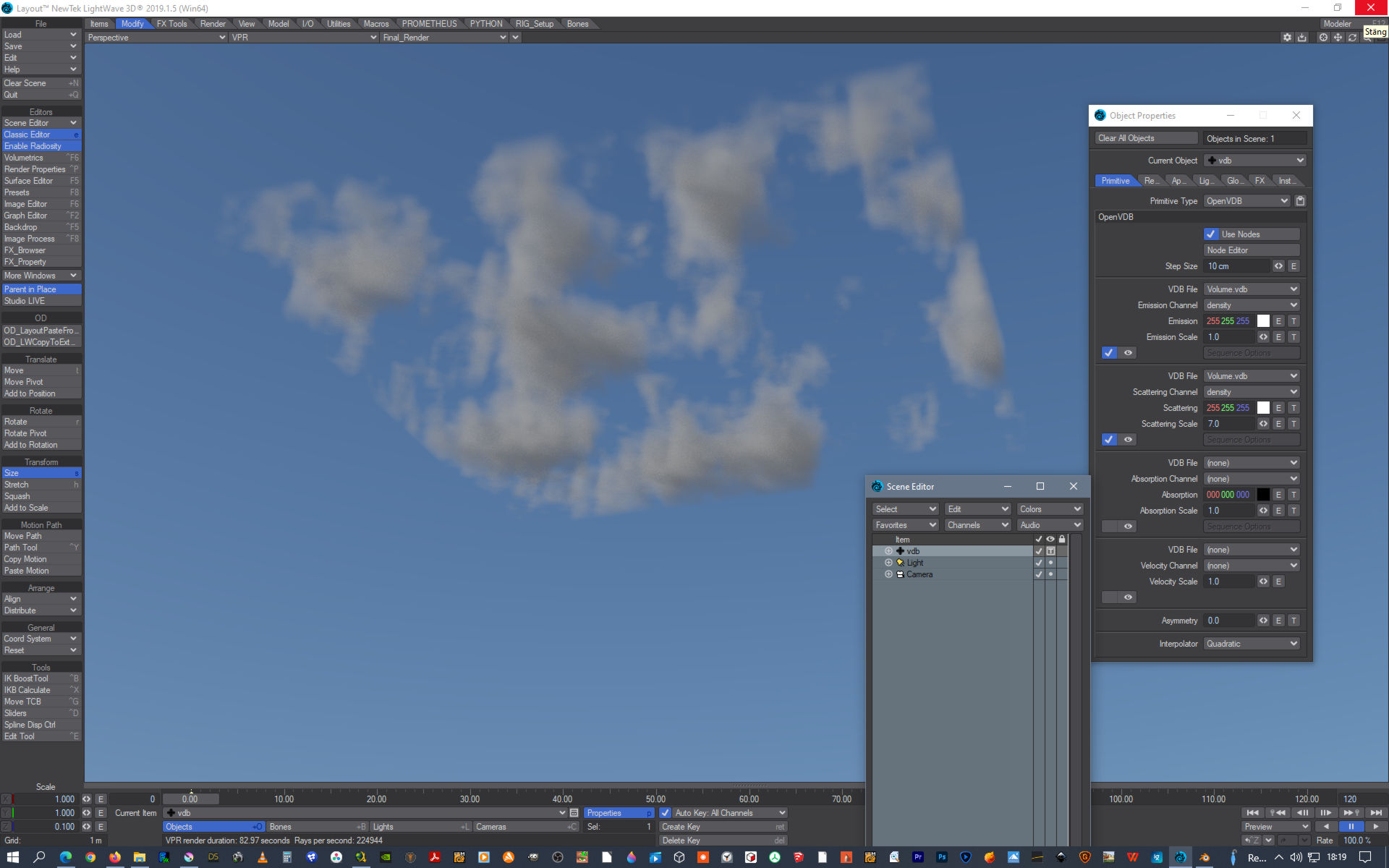 All this cool stuff with new tech in blender, as I mentioned in another thread, Lightwave´s fractals still rules, the above fractals from blender is musgrave wit fbm noise, the below is just a fbm noise, they are a bit different in character, but lightwave´s fractal RULES, And it´s much easier to tweak them to perfection with a balance between scale and noise.

Density shading and shadow or scattering is a bit too low in the sample below, but noise and softness is nice, some curve nodes to set more lower density at y-height, and some additional curves to clamp texture values.

To sum it up, fractal clouds on volume items of various types, are still looking better and easier to work with inside of Lightwave, as long as you can get away with no multiple scattering, and no GI on the clouds, it will also render faster I believe.

Personally I think, only terragen competes with lightwave fractals(cinema4D, maya, max excluded in the consideration)
Also, it´s easier to get a feedback on the cloud noise within Lightwave VS Terragen due to the fact that it iterates refreshes VPR faster than terragens previewer. 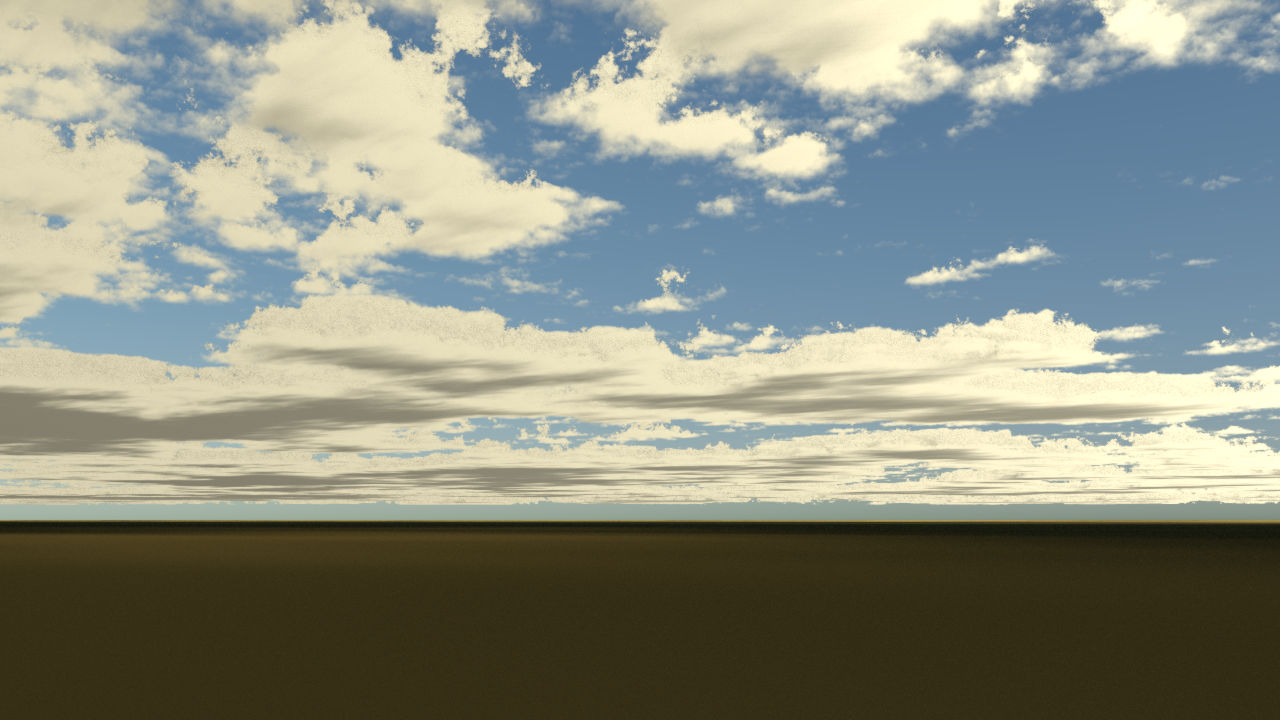 Here´s a higher resolution in the blender eevee viewport of the volume grid, I think at least 200x200x200 is required to pick up the fractal detail, and even more, final exported VDB volume with blenders USD export, is only around 28 mb, and that is not really much.
The previous sample above within blender was just set at 60x60x60 resolution 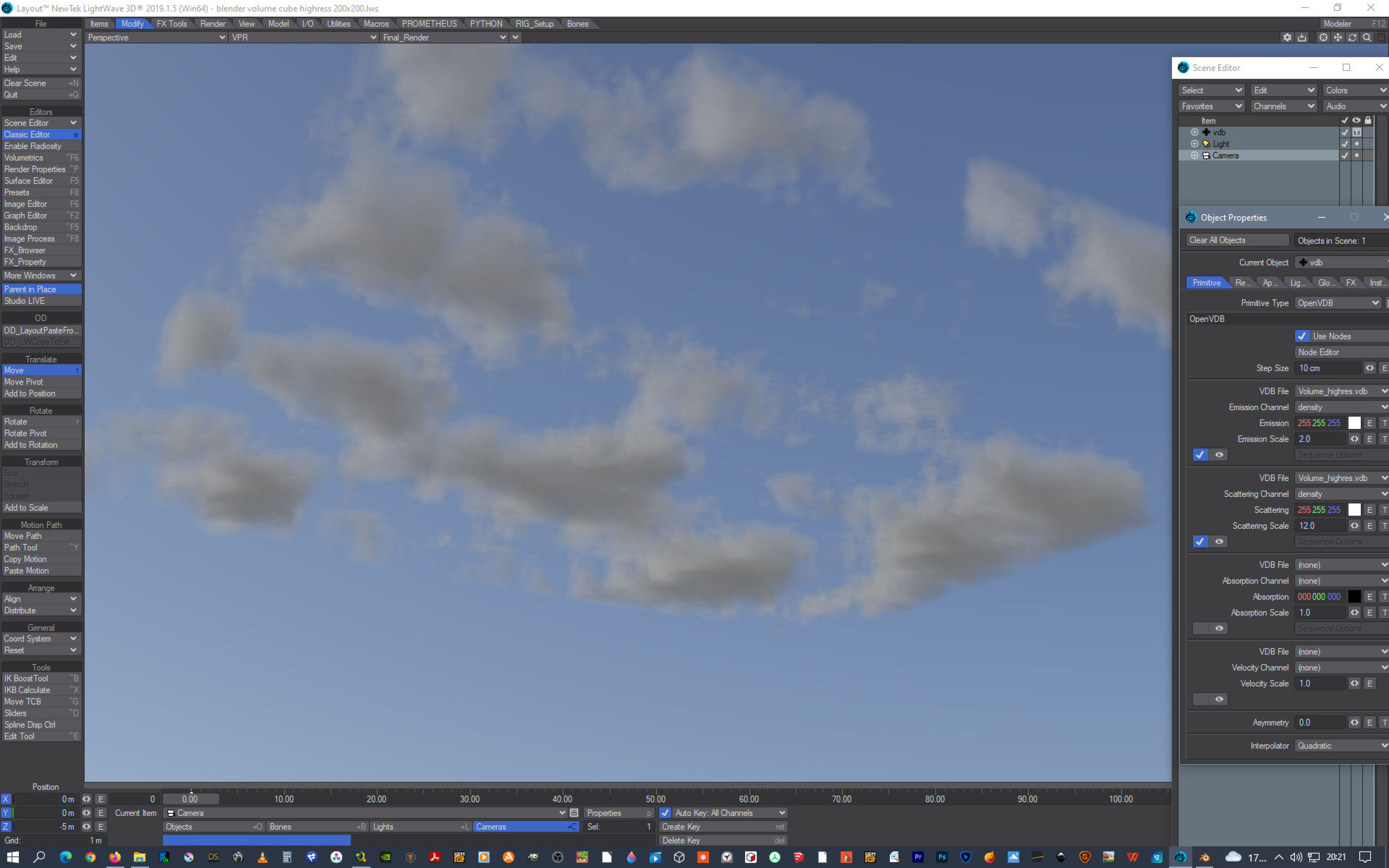 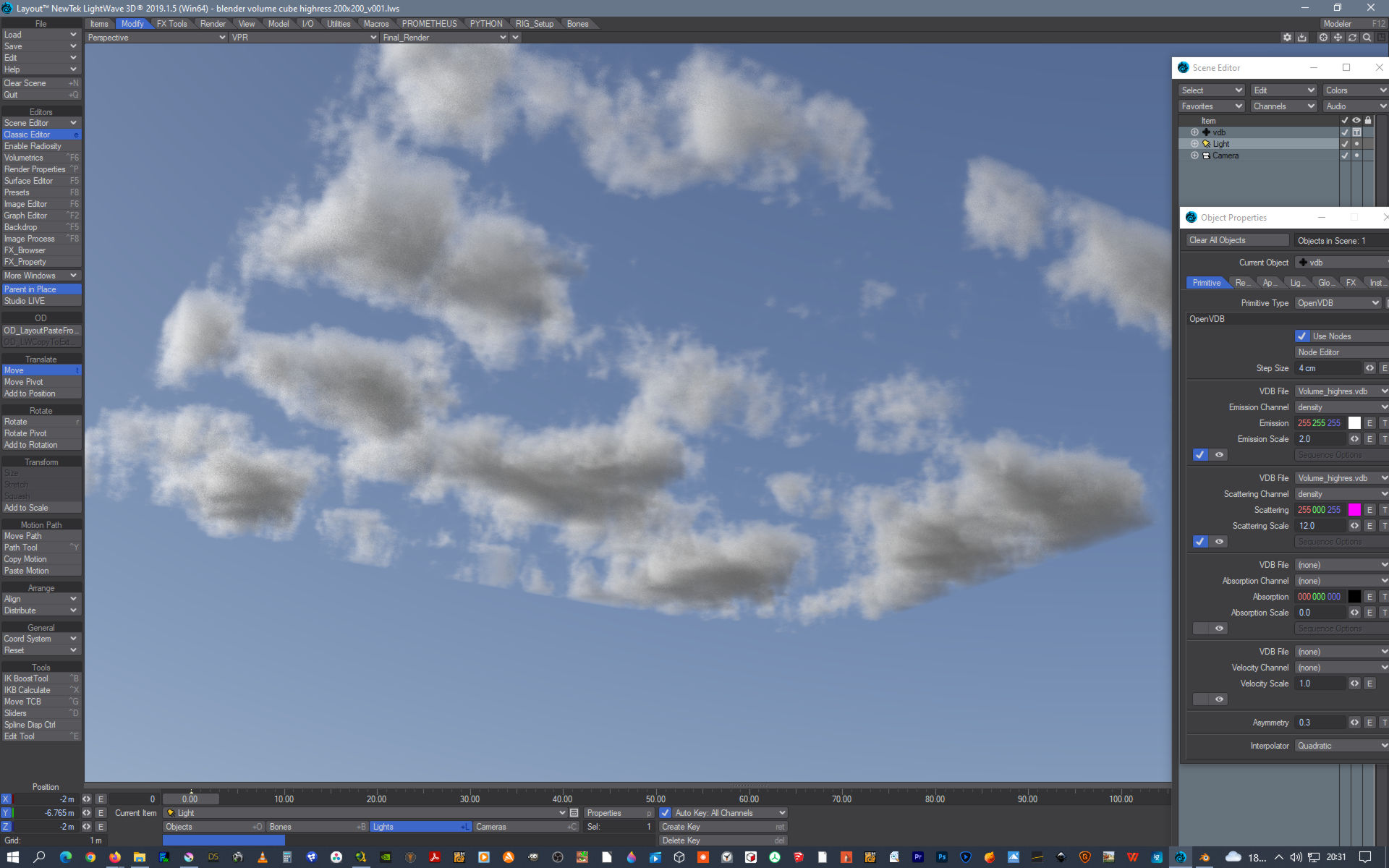 So there´s like 3-4 ways of exporting out to VDB files in blender...

1. Fluid simulations, just change to VDB cache format in blender, and then locate the folders and import to Lightwave.

2. Create a mesh, sculpt or just model it and convert mesh to volume, and displace it with noise fractals, like the cloud fractal with the volume displacer in blender, export to USD and locate the vdb folder.

3. Create geometry nodes and work with the new volume cube node, set a proper resolution and feed fractals in to that, export to USD and locate the vdb folder when importing to lightwave VDB´s.
Last edited: Jul 4, 2022

To note though, this is experimental, and the samples above is made only in lower real world scales, if you try to scale them up to real world cloudscapes, that wouldn´t hold up, you would (probably) need an insane amount of resolution to cover that detail when yo scale it up, so volume items is still better to deal with that as seen with my lightwave volume item cloud, which is quite large in scale compared to the volume cube and the vdb exports.

I have also started to re-map my lightwave shortcut keys mostly, I rarely use spacebar to toggle between move and rotate and scale, and in blender and in embergen, it is the start of the play in the timeline, so now that is all equal in all 3 software I am currently messing around with, it just makes it easier to work like that, the "s" key for size is now the same in blender and in lightwave, I use scaling like 90% more in action that saving the scenefile, so that had to go to a button only, and "s" remapped to scaling of items in lightwave, same with rotate "y" have never made any sense to me, so that is now re-mapped to "r" for rotate, the same as in blender.
Last edited: Jul 4, 2022

Thats not a bad method, and would certainly work for areas that arent large landscapes like ground fog, etc.

On the fractals..yes, LW has better fractals..and really a much better selection of procedurals in general than the other dcc's.
C

erikals said:
for lwo2 this might work in Blender 2.8
http://www.ewocprojects.be/lwoexport.html

Note to myself...
to look in to soon when lightwave gets re-installed.

i often email myself.

The plugin works in the latest release of Blender, but only LWO2 objects seem to be supported. None of the LWO3 files that I tried worked, and the importer threw a python error.

the importer threw a python error.
Click to expand...

threw an error and still worked ?
or failed.

LWO2 object loads fine. LWO3 bugs out with an error and nothing is loaded.

On a slightly different note: ex-LW user Richard Culver came up with a Chronosculpt workflow in Blender using the built-in tools. And it is non-destructive, which is nice. May be useful for those here who are making or have made the transition to B from LW and are missing Chronosculpt...

Hey at least LightWave left us one good long-lasting legacy! 🙂 I used this method quite a bit when I first came over to Blender from Lightwave. When they come in as shape keys of course, they are timed into a sequence frame by frame. In theory, with this method, all you would need is as many...